A Mom with a Hobby

In most, if not all, of the books my kids and I have read, the mothers are primarily or solely caregivers.  Yes, in the Ramona series Mrs. Quimby gets a part-time and then full-time job (is "liberated!" as her daughter Beezus says), but, although she seems to enjoy her work well enough, she does it out of economic necessity.  In picture book after picture book, the moms give hugs and kisses, prepare meals, put children to bed, and tend to all the other daily minutiae of childcare, but do not seem to be doing anything sheerly for their own pleasure. 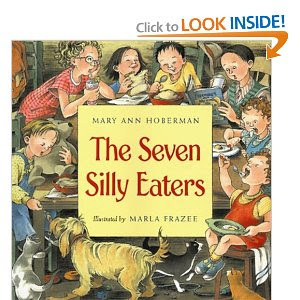 Enter Mrs. Peter, the cello-playing harried mother of seven in The Seven Silly Eaters by Mary Ann Hoberman and illustrated by my new favorite Marla Frazee.  Although the story is, as the title says, silly - the seven children each eat only one item - and their mother is a total pushover, the clever rhymes and the delightful illustrations make it utterly enjoyable.  As the family grows, the mom still manages to find time for her passion.  Even as one of the kids dumps oatmeal on the cat (which always makes me think of the song from The Fantasticks which laments, "Why did the kids put jam on the cat?  Strawberry jam all over the cat?  Why would the kids do something like that?  They did it 'cause we said no!"), Mrs. Peters does not get up from her cello but yells at the offender across the room.  Although the cello disappears from the illustrations midway through the story as Mrs. Peters is overwhelmed by her household, in the end, she takes it up again.
Of note (pun intended) is the fact that the cello is never mentioned in the text - we only see it in those charming illustrations.  Whose idea was it, I wondered, to include the cello?  The author's or the illustrator's?

So I emailed Ms. Frazee, who graciously wrote back within hours.  Apparently, I was not the first person with these questions.  Linda Urban had previously "interviewed" Ms. Frazee by email and reprinted the conversation, which included this topic, on her blog, Crooked Perfect (full links included below).  Ms. Frazee gave exactly the answer I was hoping for: she put the cello in because she thought the mom needed to be defined by something other than her status as a mother alone.  And for that, I, for one, am grateful.

Can you think of any other picture books or early chapter books where the mother has a hobby, a passion, an interest besides her children?

Here are the links to the full conversation.  The last link is the one that discusses  The Seven Silly Eaters specifically, while the others talk more generally about the process of illustrating picture books, including the collaboration with the author and editor and about what makes a book a picture book.  I highly recommend the entire series.  Enjoy!