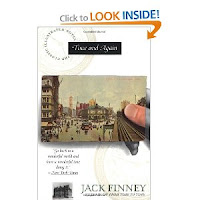 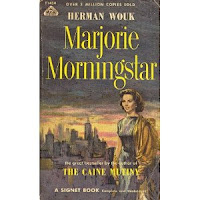 Boys and girls are different.  Their taste in books is best pictured using a Venn diagram - it overlaps in part but not entirely.  I am reminded of this whenever I start gushing about a book I loved as a child to my husband only to find out that he didn't read it.  And how can you understand someone without appreciating the books she holds dear?  So I'm "assigning" him the following books, not all of which are children's books.  They are all books that I have read over and over again.  He's worried that they are all girly books about emotions.  Here, in no particular order, is his homework.  Most are classics that require no description.
1. All-of-a-Kind Family by Sydney Taylor
2. Anne of Green Gables by L.M. Montgomery
3. A Tree Grows in Brooklyn by Betty Smith
4. From the Mixed-up Files of Mrs. Basil E. Frankweiler by E. L. Konigsburg
5. Marjorie Morningstar by Herman Wouk
6. Time and Again by Jack Finney
7. The Ramona series by Beverly Cleary
8. Pride and Prejudice by Jane Austen
What traditionally girly books do you wish the men and boys in your life would read?
Posted by Even in Australia at 9:37 AM 7 comments: 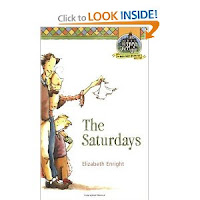 The trope of motherless children is well-known in fairy tales but it persists in modern-day children's books as well.  Picking up The Saturdays, the first in the Melendy Quartet by Elizabeth Enright, a classic I missed reading as a child, I groaned when I discovered that the Melendy children's mother was dead, a fact introduced within the first few pages.  But, I must admit, I also felt a delicious anticipation.  After all,  books about Motherless Children Having Adventures are usually good, if they meet the following criteria:
They feature several siblings (usually more than 2) who are, of course, motherless but have a mother figure, often the oldest sibling and/or a housekeeper with a cute nickname, their father is well-meaning but bumbling and inept when it comes to childcare, rendering them quite independent, they live in an old rambling house (which often has a cute name as well), often with a garden and, of course, they have all sorts of adventures. 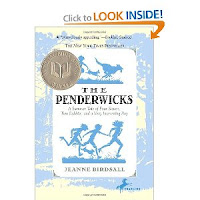 I always think of these books as being British, although they often are not - The Saturdays and another example of the genre, The The Penderwicks series by Jeanne Birdsall, were both written by Americans and set here.  But both have characters with British sounding names such as Cuffy (the housekeeper in The Saturdays) and Churchie (the housekeeper in The Penderwicks, not to mention youngest sister Batty and the name Penderwick itself).   The Shoes books by Noel Streatfeild, which actually are British, come close to falling in this category too.  And in the Cobble Street cousins series by Cynthia Rylant, the main characters are cousins instead of siblings and their parents are merely conveniently absent rather than dead.  Of course, there are the only-child orphans, like in The Secret Garden and Anne of Green Gables, which to my mind are in a different class of book entirely. 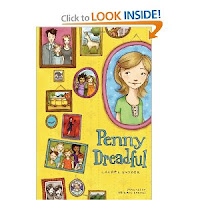 Wracking my brain, I was only able to come up with one classic character of children's literature who has two parents who figure prominently in the book: Ramona.  Betsy, Tacy, and Tib all have both parents as does Betsy in the B is for Betsy series but the parents don't play a major role.  They are perhaps slightly more prominent in the Riverside Kids series.  In Laurel Snyder's Penny Dreadful, the protagonist's father's unemployment is the catalyst for all that follows, but unlike when Ramona's father loses his job in Ramona and Her Father, her parents' trials and tribulations seem more a way to provide Penny with the independence to have all sorts of adventures, rather than an issue in and of themselves.  I'm sure middle grade and YA literature feature parents more prominently as the main character's relationship with his or her parents can be an important theme at that age (I can think of Rebecca Stead's When You Reach Me as well as most if not all of the books by Judy Blume and that's just off the top of my head), but authors of books for younger children seem to enjoy killing the mothers off.
It's easy to see why.  In The Saturdays the children pool their allowance and each takes a turn at having a special adventure in New York.  Alone.  No mother would allow that!  But it certainly is a handy plot device.  For another take on The Saturdays, head over to Storied Cities.
I remember reading lots of books about Motherless Children Having Adventures as a kid but I'm having trouble retrieving all their names now.  Any ideas?  And what about books for younger readers from the other end of the spectrum, which feature one or both parents of the main character prominently?
Posted by Even in Australia at 7:41 PM 5 comments:

The NYPL is celebrating Winnie the Pooh's 90th birthday tomorrow and you can, too! 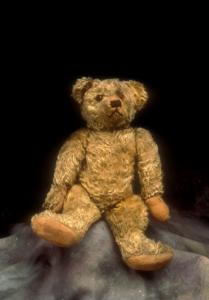 Posted by Even in Australia at 4:26 PM 2 comments:

Last week I decided to give myself (and my daughter) a break and take her out for a long walk in the stroller.  As we walked we saw so many interesting things in our neighborhood (we walked south, into the Upper West Side, rather than north into the heart of Morningside Heights), that I was inspired to take some pictures of our finds.  To my delight we discovered two pairs of lions guarding buildings... sound familiar?  They are probably about the same age as Patience and Fortitude and may have even come first, so perhaps impostors is not the right word... 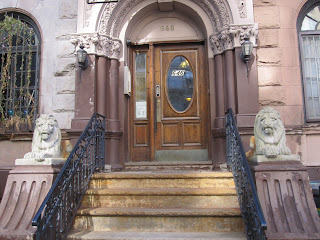 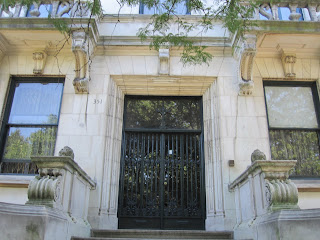 Posted by Even in Australia at 9:05 AM No comments: 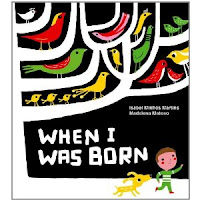 Many of those "when you were born" books and those about parental love are just so, well, sappy.  So I was delighted to discover When I Was Born by Isabel Minhos Martins illustrated by Madelena Matoso.  This one focuses on the new child's discovery of her abilities and the world around her.  Any parent knows the amount a child learns in those first few years is just incredible and Martins puts it so, so well.  "My mouth was amazed to discover what it could do: screaming, laughing, calling things by their names, saying nice words and bad words, kissing and sticking my tongue out, tasting milk, soup, yogurt and fruit."  So much is encapsulated there - from the physical to the emotional to the social (knowing which words are bad and which are nice!).  I especially like how the book is narrated from the child's perspective, rather than the parent's.  And the illustrations are beautiful and different from any others I've ever seen in a children's book. 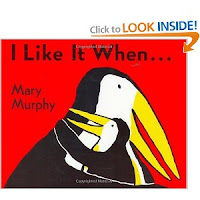 A new classic which I managed to miss, since it came out when I was too old to read it as a child and too young to read it as a parent, is Mary Murphy's I Like It When...   It is a celebration of the parent-child relationship as seen through the things the pair, a penguin parent (I've always assume, sexistly, a mother, although the parent is never identified by gender) and child (also with its gender unidentified) do together.  Also told from the child's perspective, the list includes the typical ("I like it when you read me stories.") and the slightly more unusual ("I like it when you let me help.")  This one is going on to my baby-present book list.

What are your favorite books about babyhood and parental love?
Posted by Even in Australia at 5:06 PM 1 comment:

I wasn't familiar with the works of Ellen Raskin, but we inherited two of her books and I'm not sure how I could have missed these! 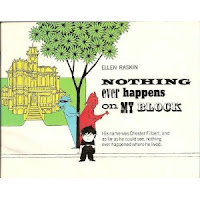 In Nothing Ever Happens on My Block, the opposite, of course is true.  Bringing to life the mother's aphorism that, "Only boring people are bored," Chester complains and complains about how uneventful life is on his street, totally oblivious to not only interesting but outlandish things happening right before him (or rather, behind him).

In Spectacles, a little girl sees all kind of strange things (a fire-breathing dragon, a chestnut mare, a blue elephant) that turn out not to be at all what they seem... until she finally gets the glasses she needs.

Both were written in the 1960s and a quick Wikipedia search revealed Ms. Raskin's authored quite a few books, including some young adult novels, as well as illustrated many written by other authors.
Posted by Even in Australia at 3:59 PM 1 comment: 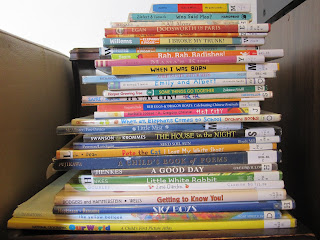 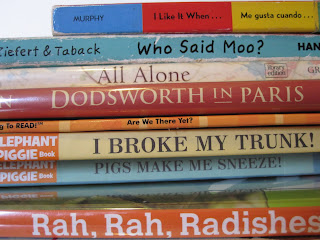 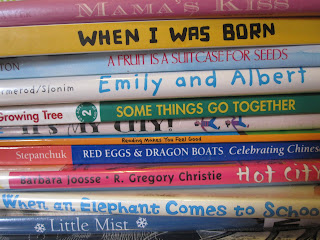 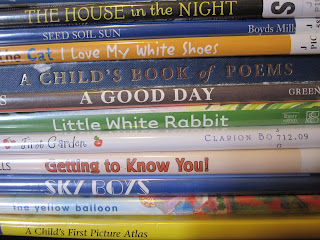 Not pictured: too many books to keep track of. 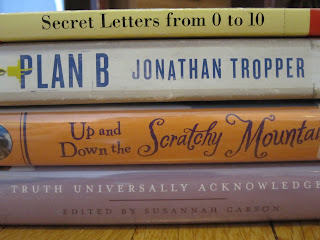 Not pictured: The American Heiress by Daisy Goodwin

Confession: Two of these are partly for blog research.  And I fear I won't get to any of them...
Posted by Even in Australia at 12:02 PM 1 comment:

Email ThisBlogThis!Share to TwitterShare to FacebookShare to Pinterest
Labels: Library

Sometimes, when you try to give your child a little independence, things don't work out exactly as planned.  And that can be all to the good.  Mistakes are, after all, part of the learning process.  But when those mistakes happen in front of judgmental passers-by, well, it's no fun for mom.  I found that out first-hand when I let my 3-year-old go through the turnstile herself when exiting the subway earlier this week, after much begging on her part.  As she pushed her way through, the turnstile whacked her in the back of the head.  But she was all smiles -she had done it herself!  Unfortunately, the moment was marred (for me, not her) not by the minor head injury but by the woman who witnessed the incident and hissed at me, "I saw that!" 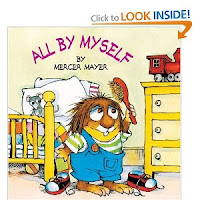 Little Critter's mom would surely understand.  In All by Myself by Mercer Meyer, an unidentifiable animal known only as Little Critter (and supposedly a porcupine, as the knowledgeable staff at my fabulous local children's bookstore informed me), does a number of tasks all by himself.  But in a nice touch, the pictures sometimes belie the words - as the text tells us he can tie his shoes all by himself, we see that in fact he can tie his shoes - to each other! - while his attempt to pour juice for his sister results in quite a mess.  And at the end of the book we see that of course mommy is irreplaceable for certain things - a story, a cuddle.   That is, comfort and love.  A book with a retro feel (first published in 1983 it looks even older to me) and a timeless message this somewhat forgotten classic along with the others in the Little Critter series is worth a look.
Posted by Even in Australia at 7:36 PM 5 comments: