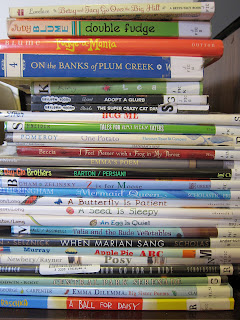 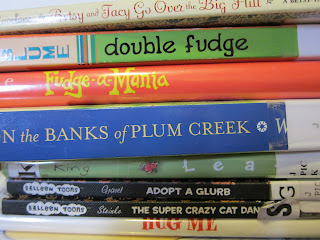 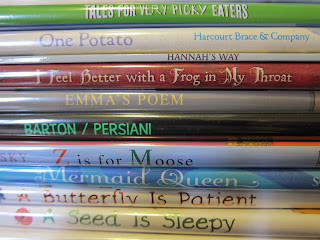 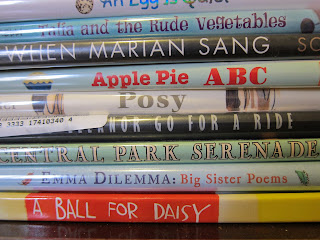 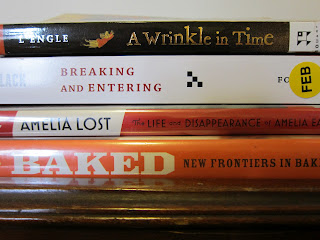 It was slim pickings for me this month!  I'd been finding that all my library holds would arrive together and I wouldn't be able to finish (or even start) all of them, so I started putting fewer on hold.  And this is what I ended up with!  I think too many choices is better than too few, so it's back to the original system.

What are you and your kids reading these days?
Posted by Even in Australia at 3:26 PM 1 comment:

Email ThisBlogThis!Share to TwitterShare to FacebookShare to Pinterest
Labels: Library

I'm sure you've noticed how authors (and TV sitcom writers) often add a new baby to a family as a way to give them new plotlines.  (Weddings, the other big TV plot device, are not, for obvious reasons, as prevalent in children's books.)  But did you ever notice how siblings in books are often spaced far apart?  Off the top of my head, I can think of the Ramona books (Beezus is 5 years older than Ramona, Roberta almost 10 years younger), Peter and Fudge and eventually Tootsie Hatcher (there's a 5 year age difference between Peter and Fudge and 8 or 9 between Peter and Tootsie) of the Fudge series and, in the books about Anastasia Krupnik, the title character and her little brother Sam (with an age gap of around 10 years).  Less well-known, Johanna Hurwitz's Riverside Kids books also feature siblings with a big age gap: Russell Michaels is 5 years older than his sister Elisa, who in turn is 4 or 5 years older than their new baby brother.

The reason, I think, is that the dialogue and action between the two siblings can be a lot funnier this way.  A two-year-old can't really star in a chapter book... unless he has a much older sibling who reacts to his antics.  There are, of course, books about siblings much closer in age (The Pain and the Great One, another Judy Blume series comes to mind) but I did find it striking that several of the best-loved children's books have brothers and sisters who are pretty far apart, age-wise.

Can you think of other fictional siblings with a big age gap?
Posted by Even in Australia at 2:01 PM 4 comments:

This week's library haul in brief (some briefer than others):

Amelia and Eleanor Go For A Ride by Pam Munoz Ryan, pictures by Brian Selznick.  I found this book via Annie and Aunt (who currently have a great series of posts about books for the very earliest of emerging readers) and I can't say enough good things about it.  From the amazing black-and-white illustrations by yes, that Brian Selznick, to the wonderful writing, this book is a winner and perfect for Women's History Month.  It is not quite non-fiction, but is based on a true event and the author smartly includes a note at the end detailing what parts are true and where she took liberties.  Of course, it doesn't hurt that the story, about the friendship and adventures of two of the most admired women of the mid-twentieth century, provides great material.  This one's going on my to-buy list.  And now I'm interested in the author's book about Marian Anderson, too. 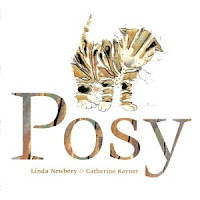 Posy by Linda Newbery and illustrated by Catherine Rayner.  This simple story about a cat's activities is elevated by the clever rhymes ("whiskers wiper/crayon swiper") and expressive illustrations.  I do wish, however, that the color palette had been enlivened a little.  The brown, black and light orange of the calico cat don't make for the brightest color scheme so less muted colors for the other items in the illustrations would have been nice. 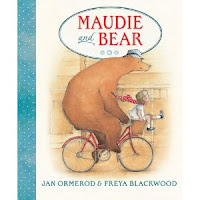 Maudie and Bear by Jan Ormerod, illustrated by Freya Blackwood.  I can't decide what I think of this collection of five stories, well-regarded in its native Australia.  As the book jacket says, "Bear's world revolves around Maudie.  Maudie's world also revolves around Maudie."  The bear is clearly a stand-in for a parental figure and somewhat of a martyred one at that.  The sacrificial aspect and the second story, a take-off on the Three Bears which I think explores the guilt Goldilocks must have felt, don't sit right with me, but the quiet prose and illustrations are lovely.  I especially like how the illustrations, not the words, provide the punchlines in both The Bike Ride and Telling Stories.

Prudence Wants a Pet written by Cathleen Daly and illustrated by Stephen Michael King.  Another (I think Australian) book I'm ambivalent about.  Prudence wants a pet so desperately she adopts all kinds of inanimate objects until her parents finally succumb.  On a first reading, my girls thought the story was hysterical, but it didn't hold up as well upon rereading.  Truly clever moments (adopting a shoe and calling it Formal Footwear, since that is what it says inside) seem to highlight that the rest of the book falls short.  The part of the story about "sea buddies" was confusing to us (what are they exactly?  some type of plant?) and neither my girls or I were sure whether the pet at the end was a cat or a dog!  On the plus side, I love how the adults in the story are only depicted from the waist-down, a true child's eye view of the world (and reminiscent of the grown-ups in Charlie Brown).  Strangely, it is the third book I've read recently with inanimate objects as pets - the tween novel, When Life Gives You O.J. by Erica S. Perl and Otherwise Known as Sheila the Great by Judy Blume were the others. 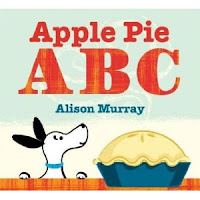 Apple Pie ABC by Alison Murray.  I have a soft spot both for retro-looking illustrations and unique alphabet books and this book scores high  on both counts.  I can't think of another alphabet book that actually tells us a story like this one, although there must be one, right?  Also going on my to-buy list.

A Ball for Daisy by Chris Raschka.  Justly deserving of its Caldecott for the illustrations (I love the colors) but I found the plot of this wordless book a little thin.

My Rotten Redheaded Older Brother by Patricia Polacco.  A great semi-autobiographical book about sibling relationships with photos of the author and her real rotten redheaded older brother on the endpapers.

Listen to My Trumpet! by Mo Willems.  The latest in the Elephant and Piggie series, this one was definitely not my favorite.

Dumpling Days by Grace Lin.  The third book in Grace Lin's semi-autobiographical middle-grade series about Pacy Lin, a Taiwanese-American girl, which, like the first two (The Year of the Dog and The Year of the Rat), successfully explores immigrant identity and the difficulties of just growing up.  The kind and wise parents remind me of the Quimbys.  My only complaint is that the books are not very subtle, but that may be all for the best considering the target age group.

Have you or your kids read any of the above?  What did you think?
Posted by Even in Australia at 10:51 PM 2 comments:

Adding In Anachronisms: An Abomination! 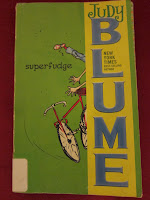 Normally, when an editor finds an anachronism in a book, it's removed or corrected so that the story remains true to the time and place in which it's set.  But in Judy Blume's Superfudge, first published in 1980, the opposite was done: anachronisms were actually added.  In the 2007 edition we have out from the library, narrator Peter Hatcher requests a laptop, an MP3 player and CDs rather than what I believe was a tape player in the original.  I think Are you There God? It's Me, Margaret was likewise "updated" with regard to feminine sanitary products!  These changes are supposed to make these books more "accessible" to today's readers.  But in my opinion, adding in these anachronisms is a big mistake and here's why.

1. Isn't one of the reasons we read to learn about times and places other than our own?  Don't we want our kids to know that CDs and sanitary pads with sticky backs didn't always exist?

2. It just doesn't make sense.  In Superfudge, Peter, his younger brother Fudge, and their friends all go to see the movie Superman.  In the theater.  Superman was playing in theaters in 1978.  Before laptops, MP3 players or CDs existed.  If you're going to change the book, why not at least do so consistently?

3.  I'm a purist both on principle and as a practical matter.  I don't believe in abridged or "children's" versions of books.  (If you can't read the real thing, just wait.  You'll be able to soon enough.  What's the rush?  And the watered down version may turn the child off the real thing, or spoil the reader who only wants the easy way out.  But I digress.)  Similarly, I don't believe in adding in these anachronisms.

So, I beg Ms. Blume, her editor, and her publisher, please reissue the Fudge books and  Are you There God? It's Me, Margaret as originally written!  By the way, if anyone has any of the original Fudge books and would like to sell them, please let me know!

Can you think of any other children's books which have been similarly "updated"?
Posted by Even in Australia at 8:13 PM 3 comments: 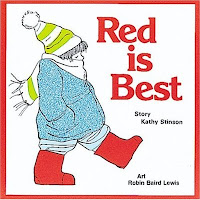 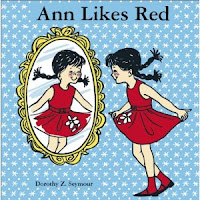 Before pink, there was red.  Red used to be a "girl color" and I've got the books to prove it.  Ann Likes Red by Dorothy Z. Seymour follows a determined little girl on a shopping trip.  She turns down every suggestion for clothes other than red and ends up with an all-red outfit - and a very nice one, I might add!  Written as an early reader and as an alternative to Dick-and-Jane type books, I have to confess that I find this book a tad boring, although my girls love it.  Its five-star rating on Amazon appears to be due more to nostalgia than quality, with reviewer after reviewer reminiscing about how this book helped her learn to read.

Even better is Red is Best by Kathy Stinson.  Here the protagonist is an equally stubborn girl, a few years younger.  She, however, provides hysterical justifications for why her red mittens are better than her brown ones (they make better snowballs), the red cup is better than the green (juice tastes better in it - of course!) and so on.  What I love about this book is that it works on multiple levels.  My 4-year-old thinks the juice really does taste better in the green cup, but my 6-year-old sees the humor and ridiculousness and gets a kick out of the book as well.  There aren't too many easy picture books that my older daughter still enjoys, but this is one of them.

Meanwhile, as a red-lover myself, I have been bemoaning the lack of red clothes for girls since my first daughter was born.  I think red's ready for a comeback!

Is there a book about your or your child's favorite color?
Posted by Even in Australia at 10:28 PM 1 comment: