Books For Our Times: Refugees

When kids hear the word "refugee" these days, they are probably most likely to think of Syria.  But unfortunately there have been refugees throughout history, from countries around the globe.  There are aspects of the refugee experience that are universal - feelings of dislocation, difficulty with a new language and culture, homesickness, fear, and, for child refugees (and immigrants), often taking on a parental role, both emotionally and logistically (often as translator).  Others are specific to refugees from a particular country, or to an individual.  Picture books tend to focus on the universal; chapter books on the specific.  One of the picture books listed here has more abstract art; the others are quite realistic.  One of the picture books is more metaphorical; the others, quite literal.  Most of the books also address the danger refugees face not just when they reach their destination or from political persecution or war back home, but along the way as well.

All of these books may be disturbing or upsetting, especially to a sensitive child.  We are lucky we have the luxury of deciding whether to expose our children to the harsher realities of our world.

This list is not comprehensive; these are just some of my favorites.

Azzi In Between by Sarah Garland.  Azzi and her family flee an unnamed Middle Eastern country, leaving her grandmother behind.  In graphic novel-style panels, the reader sees Azzi struggles with a new language, new friends, new food, a newly depressed, unemployed father - new everything!  But her family has been able to take a special little piece of home with them and Azzi uses it to cheer up her father and teach her classmates about where she is from.  The bleak cover and pictures give way to a realistically happy ending.

The Journey by Francesca Sanna.  This new book has gotten a lot of press lately.  Its abstract art may make it less scary but possibly less accessible, although the language makes clear that the narrator's family is in danger. 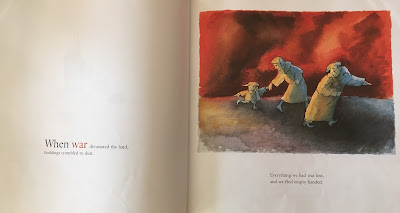 How I Learned Geography by Uri Shulevitz. My favorite of the picture books on this list.  With simple, straightforward language and gorgeous art, Uri Shulevitz tells the story of his own family's escape from WWII Poland to Kazakstan and how he took solace in a map his father purchased instead of bread, much to his mother's chagrin.  An author's note explains that his journey did not stop there.  Mr. Shulevitz and his family then moved to Paris and then Israel.  In 1959, he came on his own to the United States.  Written in what is his second? third? fourth? fifth? sixth? (he must have spoken Polish, probably Yiddish, possibly Russian, French, Hebrew, and then English) language, this is a beautiful book.   A Caldecott Honor book.

How Many Days to America? by Eve Bunting.  A family flees an unnamed Carribbean country, arriving in America just in time for Thanksgiving. 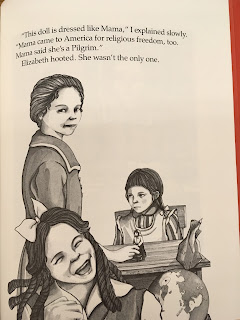 Molly's Pilgrim by Barbara Cohen.  My favorite Thanksgiving book and perhaps my favorite holiday book and just plain one of my favorites ever.  For homework, Molly has to make a Pilgrim girl (big "P") out of a clothespin.  Her mother offers to help her and dresses her in the Russian clothes she herself wears.  When Molly brings the doll to school, her classmates ridicule her because the doll is not dressed as a Pilgrim.  But the understanding teacher points out that Molly and her family are pilgrims (small "p") too, refugees from religious persecution just as the first Pilgrims were.  Make sure you have tissues nearby.  Barbara Cohen also wrote another wonderful holiday book, this time about Passover, The Carp in the Bathtub. 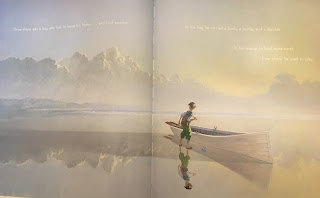 Teacup by Rebecca Young. "Once there was a boy who had to leave his home... and find another.  In his bag he carried a book, a bottle, and a blanket.  In his teacup he held some earth from where he used to play."  The boy travels alone by boat, floating for days, until he finally finds land, and a kindred spirit.  Obviously less realistic than the other books listed here, it can be read on a metaphorical level with older children and a literal level with younger children.  The spare simple language is perfect.  The earth the boy carries with him is reminiscent of the seeds Azzi's family brings with them in Azzi In Between.

Inside Out and Back Again by Thanhha Lai.  This novel-in-verse tells the story of the author's escape from Vietnam with her family during the Vietnam War.

When Hitler Stole Pink Rabbit by Judith Kerr and Journey to America by Sonia Levitin.  Both of these books recount how their authors and their families escaped Hitler's Germany, first fleeing to Switzerland and then the former to France and ultimately England and the latter to the United States. Both endure a sudden decline in their quality of lilfe and social status.  I loved both as a child. Both are also the first books of trilogies, a fact I learned only recently

It Ain't So Awful, Falafel by Firoozeh Dumas.  Zomorod Yousefzadeh is in California with her Iranian family for just a year or two for her father's job in the oil industry.  But the year is 1978 and, unbeknownst to Zomorod (now known as Cindy), the deposition of the Shah, the Iranian hostage crisis, and another oil shortage are on the horizon.  When it turns out her family can't go home because of the political situation in Iran, Zomorod becomes an accidental refugee.  While her family is economically better off than many refugees, Zomorod still faces many of the difficulties common to them all.  As many refugee (and immigrant) children do, she becomes the translator for her parents - not just of language, but of culture, and a caretaker for her depressed mother.  While children may have some trouble understanding the complex politics involved, they will certainly relate to Zomorod/Cindy's desire to fit in.  This book is, like so many on this list, based on the author's actual experience.

What would you add to this list?
Posted by Even in Australia at 8:05 PM 2 comments: