Imagination Can Never Be Obsolete

Finite funds and finite space necessitate that libraries weed their collections.  And when they do, they indicate which books they are removing by a variety of stamps or handwritten words, like this one: 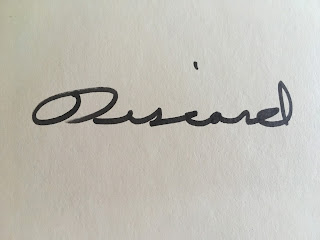 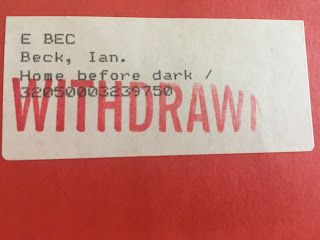 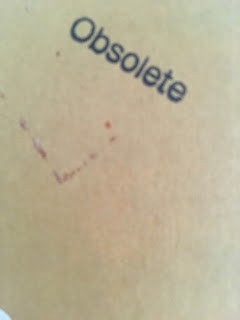 Obsolete?  Well, some books are indeed obsolete.  Books that talk about the Soviet Union as if it still exists, for example.  Atlases that show Czechoslovakia.  Books that have scientific information that has since been proved incorrect, or for which new terminology has been agreed upon (e.g. Is Pluto a planet?)

But this was a picture book.  A picture book about a child who is visited by a king and his royal entourage... which turns out to have all been in the child's imagination, piqued by a deck of playing cards.  This book is not, and could never be, obsolete.

Posted by Even in Australia at 3:15 PM 2 comments:

Tragedy Does Not Rhyme

When I came across The Little Chapel That Stood, I was immediately taken in by the cover and the use of the survival of St. Paul's chapel on 9/11 as a framing device to teach children about what happened that day.  I assumed that St. Paul would be used as a symbol of hope and resilience and that it would, like many books about horrific events, ease children into learning about the 9/11 terrorist attacks.  Like Number the Stars, which teaches children about the Holocaust by focusing on the Resistance (like Mr. Rogers' reminder to look for the helpers), or several of the books I wrote about here which focus on lost loveys as a way to teach children about the Holocaust, I assumed that The Little Chapel That Stood would be a paean to resistance and resilience. 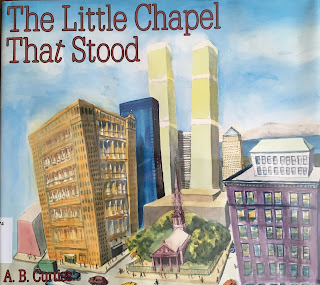 Well, I shouldn't have judged a book by its cover.

Rhyming and tragedy do not go well together.  Sure, "The Charge of the Light Brigade" rhymes, but A.B. Curtiss is no Tennyson.  With lines like "Two planes hijaced by/ a terrorist crew/Struck the Twin Towers:/ no warning, no clue!" and "One Tower, the other/ they fell, fell, fell," this book is in extremely poor taste.
Posted by Even in Australia at 11:04 AM No comments:

Email ThisBlogThis!Share to TwitterShare to FacebookShare to Pinterest
Labels: 9/11

What would you take with you if you had to leave your home?  What thing - an object, a recipe, even a story - have you inherited?  What do you want to pass down to your descendants? 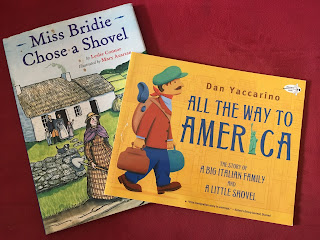 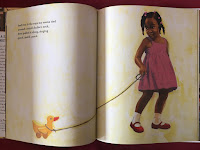 Maybe it's a shovel - like in Dan Yaccarino's All the Way to America: The Story of a Big Italian Family and A Little Shovel and Leslie Connor's Miss Bride Chose A Shovel - which can be put to any number of uses, from the expected digging to the less predictable scooping flour and salting the sidewalk in advance of a snowstorm.  Or a quilt as in The Keeping Quilt by Patricia Polacco or a rope, as in Jacqueline Woodson's This Is the Rope: A Story From the Great Migration, both of which can also be used in myriad ways - the quilt becomes a chuppah (wedding canopy); the rope ties, and hauls, but also becomes a jump rope and the string for a pull-toy. 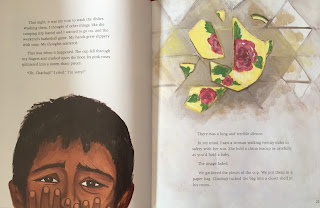 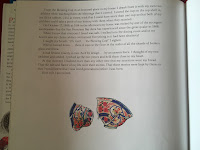 Maybe it's a cup, broken but still whole, like in Chachaji's Cup by Uma Krishnaswami (perhaps my very favorite of all the titles here), or Patricia Polacco's The Blessing Cup.

Or a precious doll or stuffed animal, perhaps lost forever as in When Hitler Stole Pink Rabbit by Judith Kerr, perhaps only thought forever lost and then found again, like Tomi Ungerer's teddy bear Otto or Claire Nivola's Elisabeth (all three of these involve WWII). Or a doll damaged and repaired, like Miki in Yoko's Show and Tell  or a teddy bear that could tell quite the story if only it could speak, like Anzac Ted and A Bear in War (both set during WWI) or Polar the Titanic Bear who journeyed on the ill-fated ship. 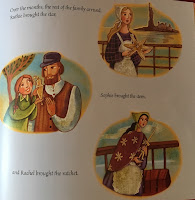 What about something that your whole family had to bring, piece by piece, like Izzy and Olivia's ancestors did in Under the Sabbath Lamp? 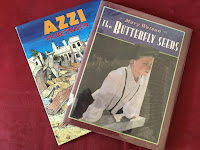 Perhaps you'd bring with you a smell or taste of home, via seeds that you could plant in your new land.  That's what Azzi does in Azzi in Between and what the protagonists do in The Butterfly Seeds. 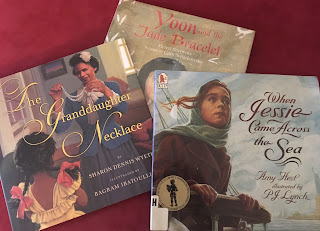 Or maybe you'd take a piece of jewelry, like the necklace in The Granddaughter Necklace or the ring in When Jessie Came Across the Sea, or the bracelet in Yoon and the Jade Bracelet? 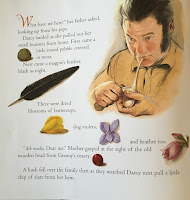 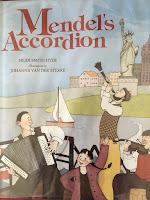 Or a collection of small mementos, like an olive pit to remind you of hunger, or a single bead from a rosary, like those in The Matchbox Diary or Small Beauties: The Journey of Darcy Heart O'Hara,

Would you bring an instrument with you? Mendel did.

Maybe something you left behind - or merely a remnant of it - was found and returned to you after you left, like the pillow in The Feather-Bed Journey.

Or something you created under the worst conditions imaginable, like the menorah in Nine Spoons: A Chanukah Story? 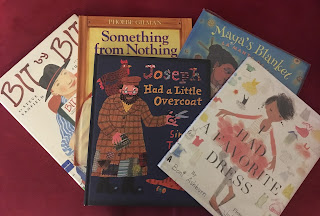 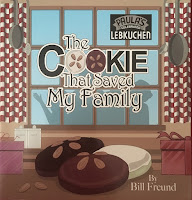 Or maybe you had to leave with nothing. Nothing tangible, that is. Instead, just the story of an item, recycled and reused until nothing is left but the memory of it, as in How I Learned Geography or Joseph Had a Little Overcoat and its many iterations (Something from Nothing, Maya's Blanket: La Manta de Maya, My Grandfather's Coat, Bit by Bit, I Had A Favorite Dress).  Or not even a recipe on a worn, creased piece of paper, but one memorized, so no one could take it from you, as Bill Freund writes in The Cookie That Saved My Family, "Something you've learned can never be taken away."

Posted by Even in Australia at 11:32 AM No comments: