My daughters' school rolled out their new ELA curriculum, Ready-Gen, yesterday.  By today, my 3rd grader was complaining about it.  And I don't blame her!  She told me that the teacher read aloud a chapter from The Lemonade War by Jacqueline Davies, an excellent book.  So far, so good.  The students were required to follow along, pointing with their fingers.  OK, I can see the rationale here, but my daughter hated this.  She said it was hard not to race ahead of the teacher.  Don't we want to encourage readers like her?  I can remember this type of frustration from when I was a kid - but even worse, other kids were reading aloud, much slower than a teacher would.  I always read ahead and then couldn't find my place when I was called on to read!

The questions following the read-aloud were boring too.  They had to write something they "learned" (it is unclear if this means something they learned about a character or plot point or something factual)  and write down what questions they had.  Not scintillating.  Not inspiring.  Not thought-provoking.

But what really got to me was that the teacher read Chapter 7 - and only Chapter 7 - to the kids.  Really?  Chapter 7?!?  Why not Chapter 1?  Why not the whole book in fact?  This curriculum seems like a step backwards to the days (my days) of what were called basal readers - boring collections of stories and excerpts, rather than actual books.  No one learns to love reading by reading from a basal reader.

What do you think about this type of reading curriculum?  What type does your school or your child's school use?
Posted by Even in Australia at 8:30 PM 5 comments:

I love Hannah!  Hannah Diamond that is, the protagonist of Mindy Warshaw Skolsky's lovely, overlooked books set during the Great Depression.  Unlike most books I've read set during this time, these take place not in an urban setting but in a suburb of New York, in Nyack.  I read the books out of order and, in my opinion, started with the best one.  In Love From Your Friend, Hannah, the story is told entirely in letters that Hannah writes and receives.  Her correspondents include a boy in the Midwest whose life is very different from hers, an old friend who moved away, her grandmother, and even President and Mrs. Roosevelt!  Hannah's relationship with her grandmother is especially loving and it is fun to read about Hannah's experiences living behind the diner her parents own. 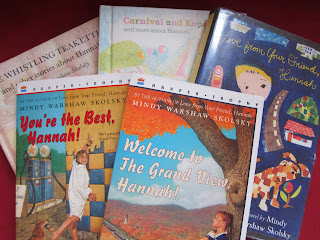 Having fallen in love with this articulate heroine, I went back to read the other books.  The first two, The Whistling Teakettle and Other Stories About Hannah and Carnival and Kopeck and More About Hannah, are written more simply and are not as engaging.  Both take place before her parents buy the restaurant featured in the later books.  Welcome to the Grand View, Hannah! (also published as Hannah Is A Palindrome) and You're the Best, Hannah! (also published as Hannah and the Best Father on Route 9W) are thoroughly enjoyable.  Hannah's problems and joys are timeless.

Hannah is an only child and her independence and her ability to be alone are striking.  She climbs up a nearby mountain, where she has a special, secret place that she goes to be alone and to think.

My daughter refused to read the first book because she claimed she did not like books that were "all letters."  (This was a good opportunity to teach her the phrase "epistolary novel"!)  However, having read and loved Welcome to the Grand View, Hannah! and You're the Best, Hannah!, I'm hoping she will be persuaded to set aside that prejudice.  (Interestingly, she does not like books told in diary format either, despite their huge popularity these days.)

Some of these books are out of print and even hard to find at the library, but they are worth searching for!

Do you or your children like epistolary and/or diary novels?
Posted by Even in Australia at 12:03 PM No comments:

Mini-reviews of the middle-grade chapter books we currently have out from the library. 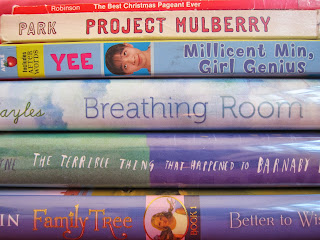 Project Mulberry by Linda Sue Park.  This book, about a Korean-American girl and her male friend who decide to enter a project about growing silkworms in the state fair, is really about much more.  MUCH more.  It's about racism (particularly mistrust and misunderstandings between Asians and blacks), ethnic identity and assimilation, what it means to be an American, sustainable farming, and novel-writing itself.  The chapters are interspersed with transcripts of "conversations" between the author and her protagonist.  My daughter gave this one 5 stars and I do too!  Also a fun book for those of us who are always on the hunt for books mentioned in other books.  The author actually lists the books mentioned in the text at the end, with the page numbers they are mentioned on, a great bonus since one of the books is identified only by a character in it, not the title, in the text. 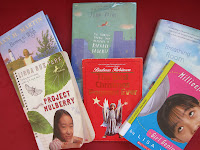 Breathing Room by Marsha Hayles.  A historical novel set in a tuberculosis sanatorium in Minnesota in 1940.  The protagonist Evvy struggles to deal with the imposed isolation and rest (at the beginning she is not even allowed to sit up, read, or talk!!), her homesickness (and especially how she misses her twin brother and her father), the deaths of fellow patients, her own mortality, her difficult relationship with her mother, her friendship with the first Jew she has ever met, and the news out of Europe.  The historical note at the end about tuberculosis and the history of its treatment in the U.S. is very informative.  As a bonus, this book also mentions another book; Evvy receives Poems for Every Mood, compiled by Harriet Moore, as a Christmas present from her mother.  A fast-paced absorbing read about a topic most of us know little about.

Fun fact: the authors of Project Mulberry and Breathing Room are writing-critque partners.  (I know this since I always read the WHOLE book - foreword, acknowledgements, and all!)

The Terrible Thing That Happened to Barnaby Brocket by John Boyle.  This book has an intriguing premise: Barnaby Brocket is born without being affected by gravity.  That is, he floats.  His parents, who only want to be normal and avoid all attention (in rebellion against their own parents, who were attention-seeking), "accidentally" let him float away at age 8.  As we follow Barnaby on adventures around (and out of) the world, he - and we - encounter a series of characters, all who have been rejected by their parents for being different from them, from a pair of lesbians (the subject is treated obliquely and I'm not sure my daughter fully understood their relationship), to an artist whose father wanted him to join the family business. I read this book aloud to my 8-year old and the idea that parents might not love their children unconditionally shocked her.  While I thought the treatment of the subject was heavy-handed, with too many examples, she liked it and said "But that's the whole point of the book."  Again, I think I expect too much subtlety than is appropriate for the intended audience.

The Best Christmas Pageant Ever by Barbara Robinson.  I only discovered this classic when it's author died and it was mentioned in her obituaries.  The poor, wild. ignorant Herdman children bring an unintended touch of authenticity to this reenactment of the Christmas story by having the Wise Men bring Mary and Joseph a ham, and having Mary burping the baby Jesus.  Robinson manages to be funny and touching at the same time, not an easy combination to pull off.  I'm looking forward to reading The Best School Year Ever by the same author.

Family Tree #1: Better to Wish by Ann M. Martin.  The first in a series of books following a family through the generations, this one focuses on Abby, who is 8 years old in 1930, during the depths of The Great Depression.  A nice but ultimately forgettable historical novel.

Millicent Min, Girl Genius by Lisa Yee.  This story of an intellectually gifted but socially awkward 11-year-old who tries to change who she is to make friends but in the end finds it is best to be true to herself was a mildly entertaining but predictable read.

Have you or your children read any of these?  What did you think?  What middle-grade fiction have you been reading lately?

Posted by Even in Australia at 2:02 PM No comments: