On days when the children fight with each other, talk back, and generally misbehave (that is, every day), it is nice to get a reminder that at least I'm doing something right - I'm raising readers.  In the last few days, these reminders have come frequently, as my daughters have been using books as their reference point - to describe themselves, events, toys, and relationships.

My five-year-old and I were discussing Mrs. Mind-Your-Own-Business, a character in the Riverside Kids books, and I pointed out how she sees the negative in everything.  My daughter responded, "Like Eeyore." and then went on to say, "I'm the opposite of Eeyore.  I see the funny in everything."  (This is true!)

A few days later, as she and I worked on a project together (or rather, I did the project - an addition chart, and she acted as my gofer), she said, "Whenever I do art projects with H [her older sister], I'm Tib.  She always makes me do things for her [just as Betsy and Tacy make Tib do things for them]."  True again! 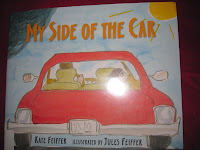 Another evening my 8-year-old was placing a disproportionately large doll into a small dollhouse.  "She's Alice in Wonderland!," my daughter exclaimed, referring to when Alice grew and was similarly disproportionate to her surroundings.

I have written before about our love of the book My Side of the Car and how we use it as an inside joke.   Well, the other day it actually rained on only one side of a train I was in.  My girls were delighted when I came home to report this and knew, without my mentioning it, that it was a reference to a book.

And how could I forget the North-going Zax and the South-going Zax, included here, neither of whom will budge an inch to the east or west so the other can pass?  My kids love to assert that they are Zax when they meet head-on in our hallway!

What about you and your kids?  Do you frequently use literary frames of reference?
Posted by Even in Australia at 3:54 PM 2 comments:

Email ThisBlogThis!Share to TwitterShare to FacebookShare to Pinterest
Labels: Alice in Wonderland, Betsy-Tacy, Johanna Hurwitz, Literary References, My Side of the Car, Raising a reader, Riverside Kids 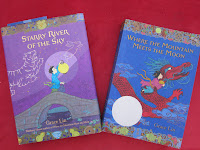 Recently, we have read several books which I would consider novel- or novella-length fairy tales.  One was Happily Ever After, which I gave to my daughter for her birthday.  Two others were Grace Lin's Where the Mountain Meets the Moon and Starry River of the Sky, both of which fall into this category doubly, as not only are they fairy tales themselves (the protagonists go on a (physical) journey only to find that what they are seeking is really back where they started) but within each book are modern retellings of traditional Chinese folktales. 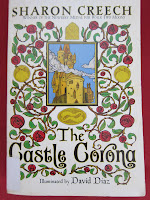 And then I read The Castle Corona by Sharon Creech.  Of course I had heard of the author, had read her award-winning Walk Two Moons (which underwhelmed me) and her picture book A Fine, Fine School, but I had never heard of this book.  Is it just because it was published in between when I was the target audience and when I started reading children's books again (2007)? Have you heard of it?  Read it? 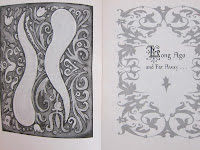 If not, you should.  Written by Ms. Creech and "illuminated" by David Diaz, this novel takes us into a kingdom with spoiled royals and good, honest peasants, who are all seeking something.  The illustrations, the typeface, the illuminated letters that begin each chapter help transport us to this magical, timeless place, an alternate-universe Italy (all the characters have Italian names) without cellphones or chamber pots, with a castle that creaks and groans and is trying to tell its inhabitants something (reminiscent of the castle in Tuesdays at the Castle and Wednesdays in the Tower by Jessica Day George).  During the course of the novel, both we and the characters learn about the power of words and stories (just as we do in Grace Lin's works) and that material possessions cannot bring happiness (although without a full belly it is hard to be completely happy). In a somewhat comedic, modern touch, the king's (and later, queen's) personal "hermits" act as the royals' therapists.

I loved traveling to the kingdom of Corona and I think your middle-grader (and you!) will love it too.
Posted by Even in Australia at 3:33 PM No comments: