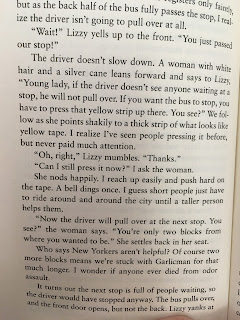 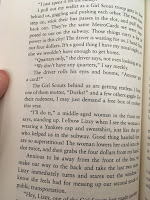 After my last post about books set in NYC, I picked up another book I'd been meaning to read, Jeremy Fink and the Meaning of Life, only to discover it too was set in New York.  But it got the details wrong and those mistakes nearly ruined the book for me.  True, the protagonist is a bit of an anxious kid, afraid to travel by himself in the city.  But certainly he's traveled with his mom!  My kids - and all those I know - know to use a Metrocard on the bus and to signal for their stop!  (In fact, NYC kids, from toddlerhood, beg to be the one to ring for their stop.  It's kind of like pressing the elevator button.)   All New York kids, except the most sheltered and wealthy, which Jeremy and his friend Lizzie clearly are not, would know these things.  Despite an appearance by the Museum of Natural History, this book could have been set anywhere.  Those two facts make it ineligible for my next books-set-in-NYC post. 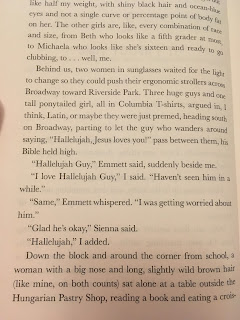 Days later, a friend posted a photo of a page from Rachel Vail's book, Well, That Was Awkward on Facebook, in which the characters hear the "Halleluyah Guy" (a real, older man who walks the streets of the Upper West Side from approximately 100th to 110th St. shouting, "Glor-EE!  Glor-EE!  Jesus.  Jesus.  Jesus.  HalleluYAH!  HalleluYAH!"  and are relieved that he is well since they haven't heard him in a while.  The Facebook thread blew up with current and former Upper West Siders sharing their reminiscences about Halleluyah Guy and, just like the characters, sharing their concerns about whether he was still with us, until one commenter finally said she'd heard him recently.  Now THAT'S authenticity for you.

So I picked up the book, and on nearly every page was a reference to my neighborhood.  I drove my husband nuts by telling him about every mention of our local pizza place, bakery, bagel shop.  I started to wonder if the book was too authentic - too specific to a time and place to be universal.  (It's really specific.  Only people who lived between 96th St. and 112th St. and Amsterdam Avenue to Riverside knew what we were talking about.  Upper West Siders who live in the 70s had no idea.)  But it's not.  It's really about relationships - familial, platonic, and romantic.  It manages the trick of being both universal and specific, and its authenticity and accuracy have earned it a place on my next list of New York city books.

What errors in a book ruined or almost ruined a book for you?
Posted by Even in Australia at 9:29 AM No comments: