New and New to Me New York Books

There must be more books written about and/or set in New York than any other city in the world. London might come close, Paris should be up there, but New York has to be the winner, don't you think?  I have absolutely no evidence to back up this claim, but it's my story and I'm stickin' to it. Here are some of them: 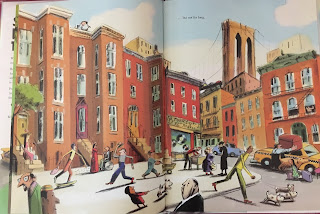 Stop Feedin' Da Boids by James Sage, illustrated by Pierre Pratt.   I wanted to love this book.  I love the title, resuscitating as it does a nearly-gone New York accent.  The first full double-page spread by illustrator Pierre Pratt of a scene in Brooklyn with the Brooklyn Bridge in the distance is perfection.  With its bright colors and its diversity of Brooklyn residents - a Hasid, a man in a wheelchair, a Muslim, a dogwalker, a skateboarder - it's both visually beautiful and so evocative of its setting.  And it's resurrection of the classic New York accent - perfect.  But the plot is lacking.  Swand, having moved from the country, is eager to find any signs of nature in New York. But soon her building is overrun with pigeons - and their noise and filth - due to her feeding them. The solution is obvious: stop feedin' da boids!  But it takes far too many pages to get there and the journey is not worth it.  Nonetheless, this book prompted me to check out Pratt's other work.  He's prolific, and I'd never heard of him before. 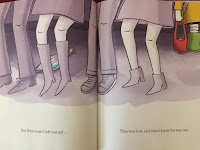 Pax and Blue by Lori Richmond. Another pigeon book.  This time, a pigeon ends up in the subway. Sweet but not saccharine, with more great NYC illustrations, including subway illustrations.  I love how only the title character is in color.

Rosa-Too-Little, written and illustrated by Sue Felt.  One of my newly discovered finds, this book, published in 1950, is set uptown, seemingly in Spanish Harlem and features the local library branch.  So of course I love it! The street scene art is fantastic. 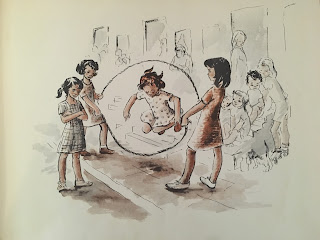 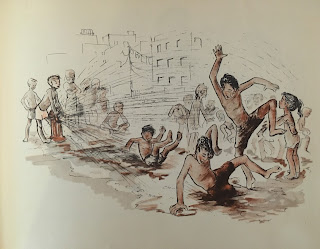 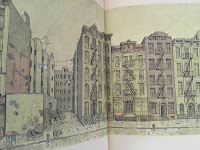 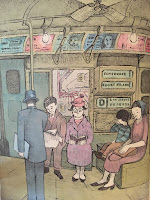 One Monday Morning by Uri Shulevitz.  A little boy who lives in a tenement building and takes the D train finds a way to amuse himself on a rainy day.  While the street sign is not easy to read, I'm pretty sure it says Broome Street. 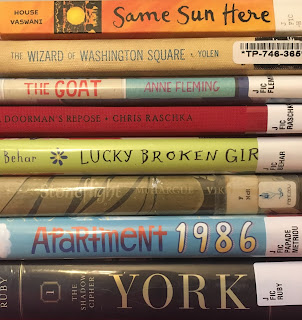 The Goat by Anne Fleming.  I wrote about this one here.  Love it.

The Doorman's Repose, written and illustrated by Chris Raschka.  This volume of interconnected stories set in a single apartment building, 777 Garden Avenue, a fictional short street that I imagine something like Claremont or Manhattan Avenue, is just so good.  From the doorman (think of Henry, featured in Judy Blume's Fudge books, but with more gravitas), the elevator (Otis, naturally), the cranky busybody (recalling Mrs. Mind-Your-Own-Business of Johanna Hurwitz's Riverside Kids series), the local mice  (one a psychiatrist (this must be the Upper West Side), who has learned her specialty by residing in the tissue box of her human equivalent, and a jazz musician, who has learned his art by living in a double bass), the super (Clementine's dad?), this book gives life to some of the "eight million stories" in the city. 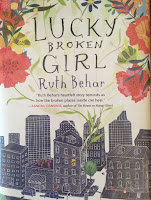 Lucky Broken Girl by Ruth Behar.  In this semi-autobiographical novel, a Cuban Jewish immigrant girl to oft-literarily-neglected Queens is bedridden for a year after a car accident, and learns who her friends really are.  (Other books set in Queens include Gina by Bernard Waber (picture book), Twerp and its sequel Finding the Worm by Mark Goldblatt, and, in YA, Burn Baby Burn by Meg Medina.)

Apartment 1986 by Lisa Papademetriou.  Another book I wanted to like more than I did.  Callie skips school one day, but playing hooky suddenly becomes a habit she can't break.  Add in parents who are acting strangely, financial fraud, and a grandmother with a secret boyfriend, plus a friend facing a debilitating illness, and it all seemed a bit much to me.

York: The Shadow Cipher by Laura Ruby.  Set in a present-day but alternate NYC, where the subways are immaculate and never break down.  On second thought, maybe it's not just an alternate NYC but a fantasy NYC.  I just started reading this aloud to my 9-year-old.  I'll keep you posted! 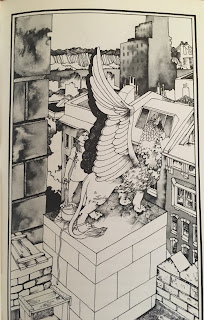 Stoneflight by Georgess McHargue.  Janie is stuck in the city for the summer.  Her parents are preoccupied with their jobs and their faltering marriage.  She takes refuge in her Morningside Height's building's rooftop, where she, by force of will (heart?) brings the stone carved griffin that stands atop it to life.  With scenes at the local library branch, the main 42nd street building, and a "vacation" in her uncle's Upper East Side townhouse, combined with flights on the griffin over Manhattan, I don't understand how this book has ever gone out of print. It's similarities to the recent adult book, The Gargoyle Hunters (preteen protagonist named - you guessed it, Griffin -  whose parents' marriage is on the rocks) makes me wonder whether that book's author read Stoneflight before he wrote his book. 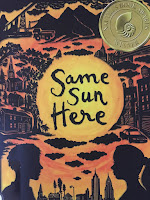 Same Sun Here by Silas House and Neela Vaswani.  I grew up on the Lower East Side and I knew that this book featured letters between from a girl living there and a penpal in Kentucky.  And yet even I  was set around the turn or beginning of the last century, in the Lower East Side's heyday, as if real, young people don't live there anymore.  Of course, I was wrong.  Written in 2008 and set contemporaneously, this epistolary novel features Meena, a young Indian immigrant, on the LES, and River, a young boy who lives in Kentucky.  Meena has only recently rejoined her family in NYC from India after her parents and brother finally had enough money to pay for her to rejoin them. While the book deals with many of the issues you would expect - feelings of abandonment, homesickness - it also addresses body image (Meena writes to River about shaving her legs, which he is not pleased about, and her brother is the person who teaches her how), interracial relationships (her brother's girlfriend is Latina) and a sibling relationship that seems a little too good to be true.  And on River's side, the focus is on the environmental disaster of mountaintop removal done to facilitate coal mining.  The two bond over the stereotypes that both of them face but the book never seems preachy. 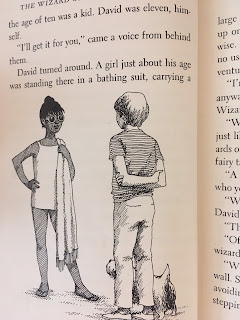 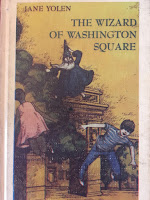 The Wizard of Washington Square by Jane Yolen.  David, new to NYC, meets the Wizard of Washington Square.  I have one quibble with  this book.  The boy's dog goes missing and his parents don't notice?!?  But it makes up for it with great descriptions of Washington Square Park in the late '60s, with people signing petitions without reading them, everyone having long hair, and a reference to the IRT (subway). And do those illustrations look familiar? Why, yes they do.  Do they perhaps remind you of a boy who's having a bad day?  A terrible day?  A terrible, horrible, no good, very bad day?  They should!  Ray Cruz is indeed the illustrator here.

What are your favorite new or lesser known children's books set in New York?

Posted by Even in Australia at 9:47 AM 4 comments: