Needed: A Cure for Insufferable Mothers 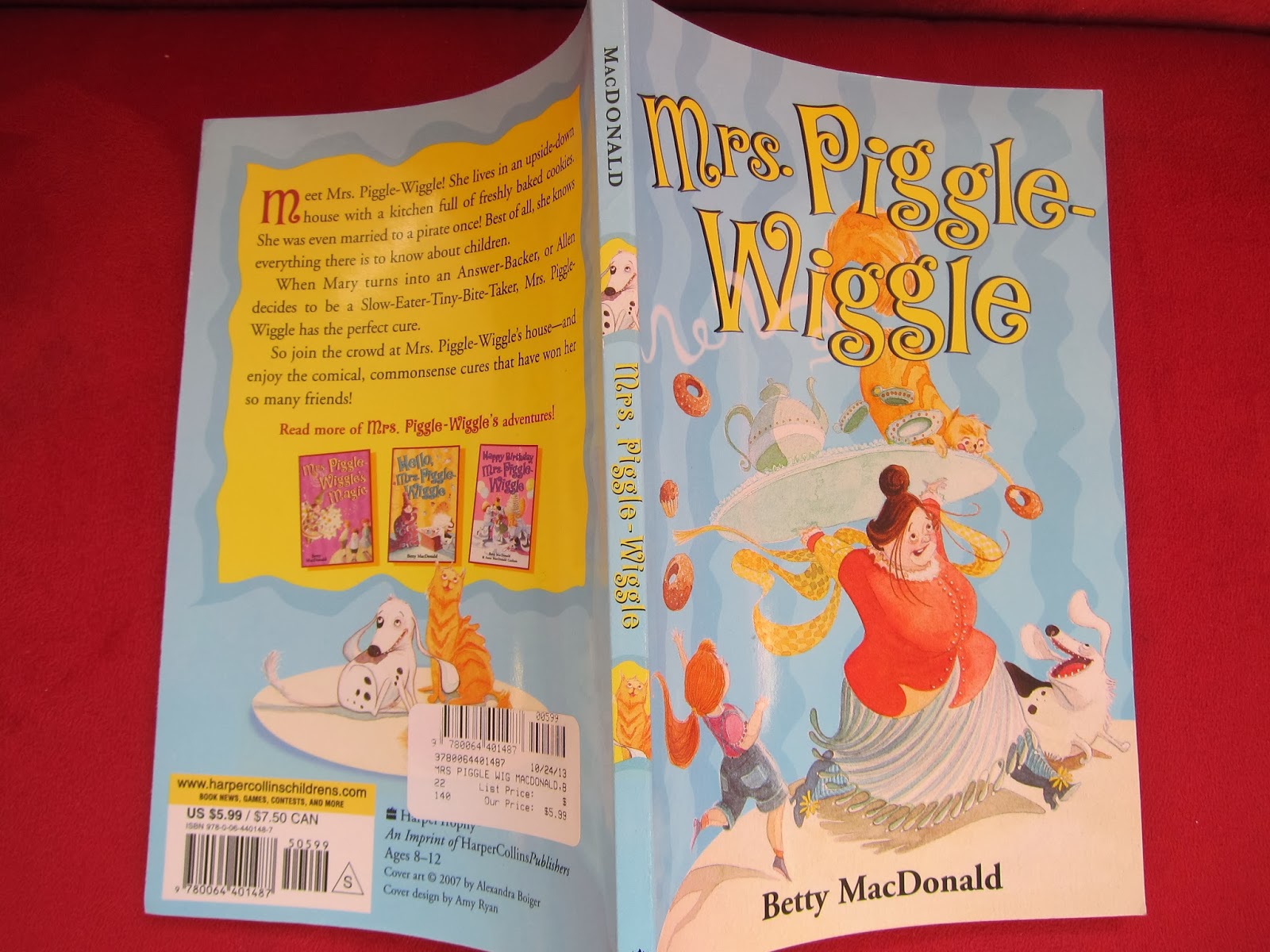 Well, Betty MacDonald, author of the Mrs. Piggle-Wiggle books (there are five and I must confess, so far I've only read the first), knows them well too, and that is yet another reason her books are a delight to read aloud.  If you don't know Mrs. Piggle-Wiggle, you are in for a treat.  A lover of children, not having any herself, (sometimes it is easier to deal with them when they are not your own!) she lives in an upside house and has cures for sassiness, sparring siblings, and all other manner of childhood afflictions.  The cures usually consist of giving the child a taste of her own medicine and/or taking her condition to extremes (e.g., providing the Tiny-Bite-Taker with penny-sized portions; letting the non-bather get so dirty that you can plant her with radish seeds).  Not only will you recognize your child's misbehavior in her pages, you will recognize the insufferable mothers (and they are, in the only dated thing about this book, solely mothers).  Ms. MacDonald pokes fun at them, not just by exaggerating their annoying traits (or perhaps just telling the truth!) but by giving them - and their horrid children - the most ridiculous names.

When Patsy won't take a bath, her mother calls her friend Mrs. Grotto for help.  Mrs. Grotto's response? "'Well, frankly, I don't know what to tell you because our little Paraphernalia simply worships her bath.  Of course, Paraphernalia is quite a remarkable child anyway.  Why, Thursday afternoon she said...'"

And when Hubert's mother seeks help in getting him to pick up his toys, Mrs. Bags can't help at all because she "'started Ermintrude picking up her toys when she was six months old.'"

I suppose the best revenge on such mothers is curing your own child, but we know they are never fully cured.  They simply come down with next illness.  As my pediatrician once told me, at a certain age, children are either sick, getting over being sick, or getting sick.  What is true for illnesses of the body is true for misbehavior, too.  Although we know that the current affliction is "just a phase," we know that as soon as it is over, there will be a new phase to contend with!

If only Mrs. Piggle-Wiggle had a cure for insufferable mothers.
Posted by Even in Australia at 10:49 AM 2 comments:

Wonderful, Even Out of Order

Despite the fact that I'm incredibly messy with physical things (just ask my husband), I'm pretty organized when it comes to mental tasks.  If a book is part of a series, I read it in order.  And I finish the series (with rare exceptions).  That's why I was horrified to discover my daughter reading Phyllis Reynolds Naylor's Alice books out of order.  Out of order!  Who does such a thing?  And yet, when I picked one up, I understood.

Alice's voice is so real, so frank, so matter-of-fact, that you can't help but be drawn in.  And, being, let us say, frugal, I put the books on hold at the library and they arrived out of order, leaving us with a random assortment as we await earlier ones in the series.  But once my daughter had read one, she just couldn't wait to read the others.  (The books were actually written slightly out of order, with the prequels coming later, as younger readers clamored to get in on the Alice action.  Moreover, with 28 books in the series (!!!), we'll see if my daughter actually reads them all.)


I picked up the one where Alice is in seventh grade (Alice in Rapture, Sort Of).  I opened it to the middle (hey, once you're reading the series out of order, why not pick up an individual book halfway through?), to this part:


"It's bodies!" Elizabeth told us.  "I mean, they're so embarrassing."

"Everybody's got one," I said.

"The noises they make!" she said.  "I have to eat four crackers just before I go out with Tom to keep my stomach from growling."

Pitch perfect, right?  Alice isn't horribly embarrassed by her body, as her friend Elizabeth is, but neither is she entirely comfortable with it.  What girl or woman is?

"I knew her mother had gone with her to buy it.  I wondered why a mother would buy such a suit for a daughter who wasn't supposed to kiss until she was sixteen.  Some parents don't seem to have a bit of sense."

When her boyfriend kisses her, she tells him simply and straightforwardly, "I don't think I'm ready for this yet."  And in the perfect touch, "He looked a little relieved himself."

The Alice books are some of the most-censored books out there.  What a pity.  Alice is a wonderful guide for young girls.  She's the big sister every girl has wished for and no one has ever had.  The time to read these books is when the reader is just a bit younger than Alice is in each book.  I'm thrilled my 8-year-old came upon these books.

If only we had them in order.
Posted by Even in Australia at 2:05 PM No comments:

Mini-reviews of what we're reading now.

The Duchess Bakes a Cake by Virginia Kahl.  Introduced to us by our awesome, well-read, 12-year-old babysitter, this rhyming story "scans," as they say.  The Duchess goes a wee bit beyond her natural abilities and decides to bake a "luscious, light, delectable cake."  Although her mistakes with yeast and the hijinks that ensue are the subject of many a book (see my review of Bembelman's Bakery, published more than 20 years after this one, which was first published in 1955), this story is utterly delightful, made more so by the perfect rhymes and amusing drawings. 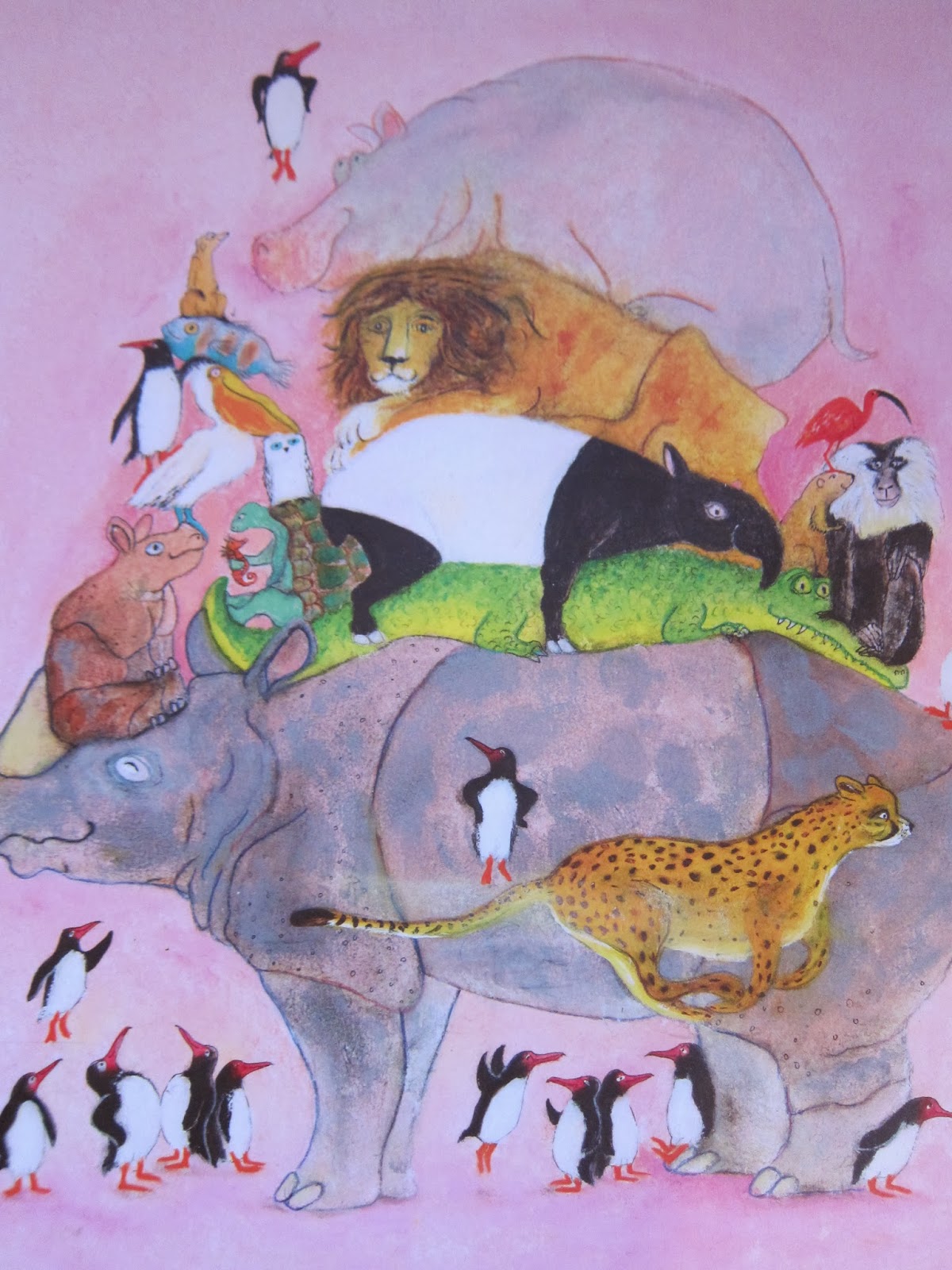 Jumping Penguins by Marije Tolman.  An assortment of utterly random, bizarre and perfectly fascinating animal facts accompanied by whimsical, watercolor illustrations.  You want to know how far caterpillars can throw their poop?  Then this is the book for you.

Old Henry by Joan W. Blos.  Henry's house doesn't look like everyone else's on his block.  And apparently there is no neighborhood association to force him to mow his lawn or mend his fence.  Billed as a book about different people learning to live in harmony, I saw this more as a comforting book for the messy among us and an ode to how important community is. 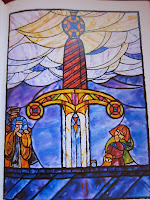 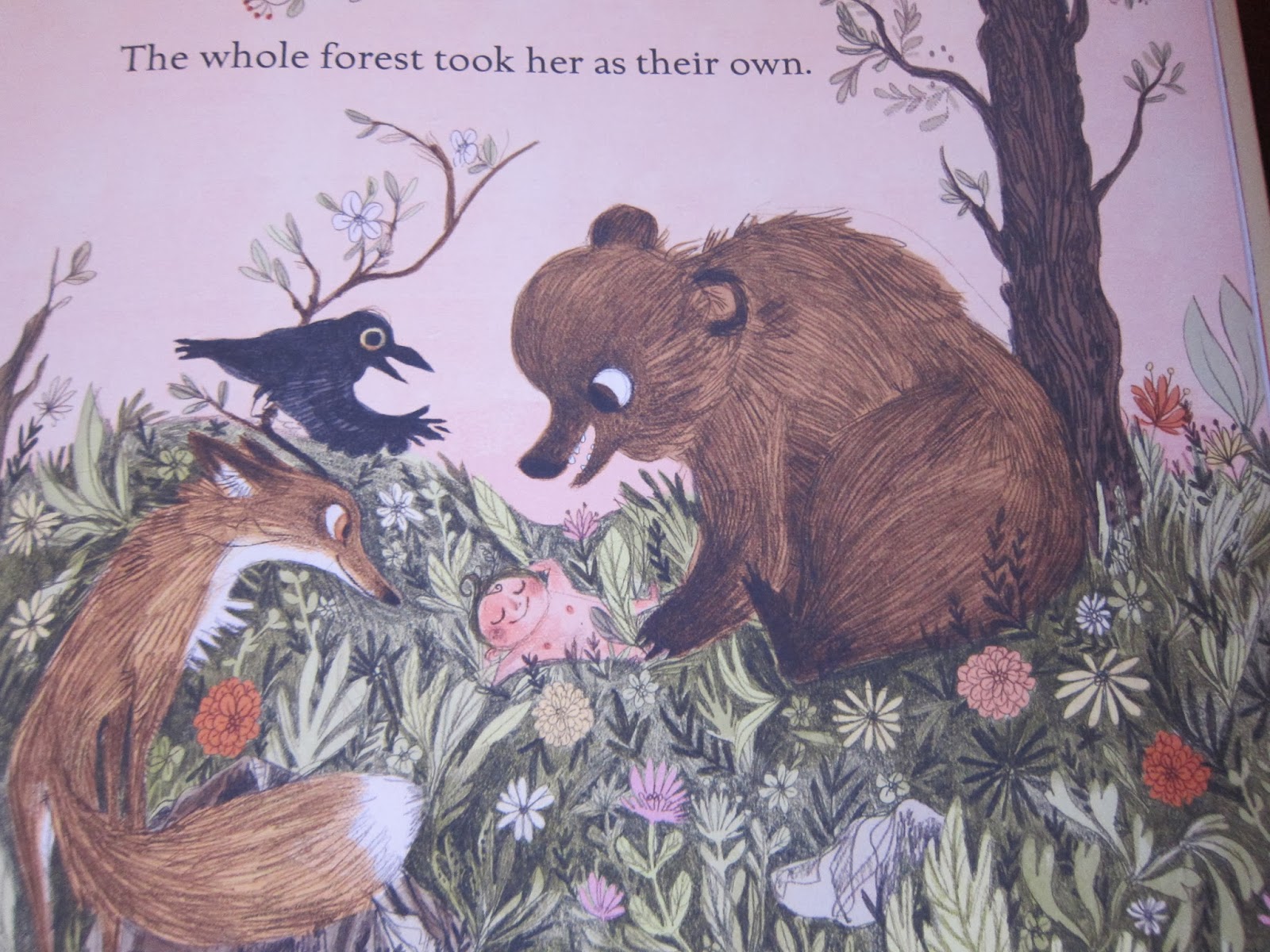 Wild by Emily Hughes.  After quite a bit of hype I was disappointed by this book.  The story of a child who is left in the woods and raised by animals, found by people and returned to "civilization," and, unable to adapt, returned to the forest, was, in my opinion, lacking in plot.  I can't see this one appealing to kids.

One Grain of Rice: A Mathematical Folktale by Demi.  This is a beautifully illustrated version of a folktale which teaches the mathematical concept that doubling causes numbers to grow incredibly quickly.  The illustrations and folktale setting may even entrance the math phobic! 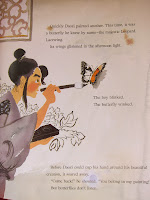 Brush of the Gods by Lenore Look, illustrated by Meilo So.   This picture book by Lenore Look, author of the chapter book series Ruby Lu (enjoyed by my older daughter last year), captivated my 6-year-old.  Using the limited available knowledge about the life of the famous Chinese painter Wu Daozi, Look tells a story about the power of art, as Wu's paintings, in her telling, literally come alive.

Christina Katerina and the Box by (well-known children's book editor) Patricia Lee Gauch.  Another favorite of my kindergartener about the power of imagination.  A forgotten classic, its place usurped recently by other books of the same ilk such as Not a Box by Antoinette Portis and The Nowhere Box by Sam Zuppardi. 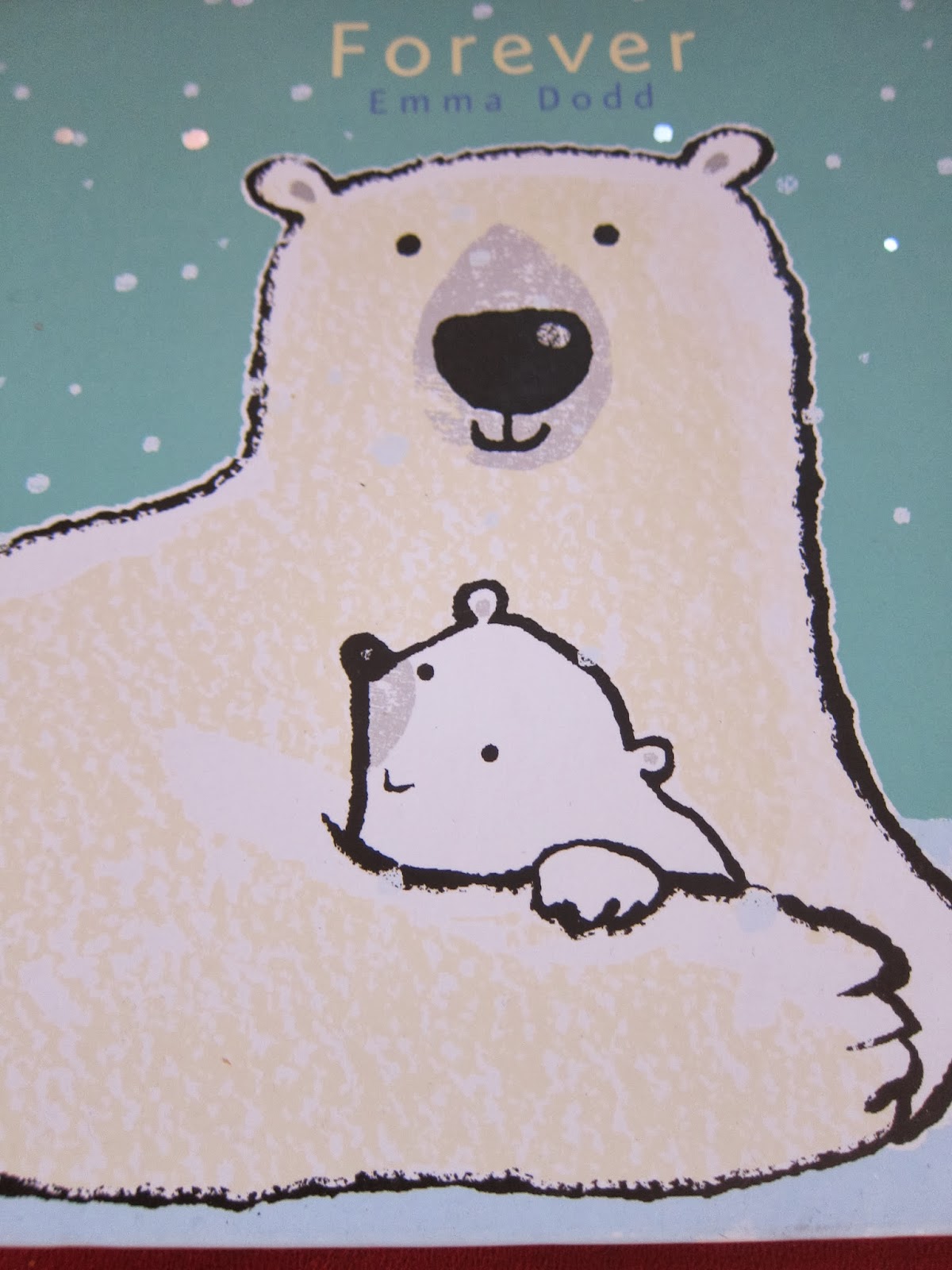 Forever by Emma Dodd.  This plotless promise of unconditional love from a mama polar bear to her cub is set against an Arctic landscape which is brought to shimmering life with shiny foil illustrations.  A bit gimmicky, but I fell for it anyway!

When Jessie Came Across the Sea by Amy Hest.  In this beautiful story about a Jewish immigrant to America, a grandmother's bond with her granddaughter cannot be severed by time or distance.  An object - here a wedding ring - represents home, family, and history.  Other books with these themes include Patricia Polacco's  The Keeping Quilt and The Blessing Cup and Dan Yaccarino's All the Way to America: The Story of a Big Italian Family and a Little Shovel. 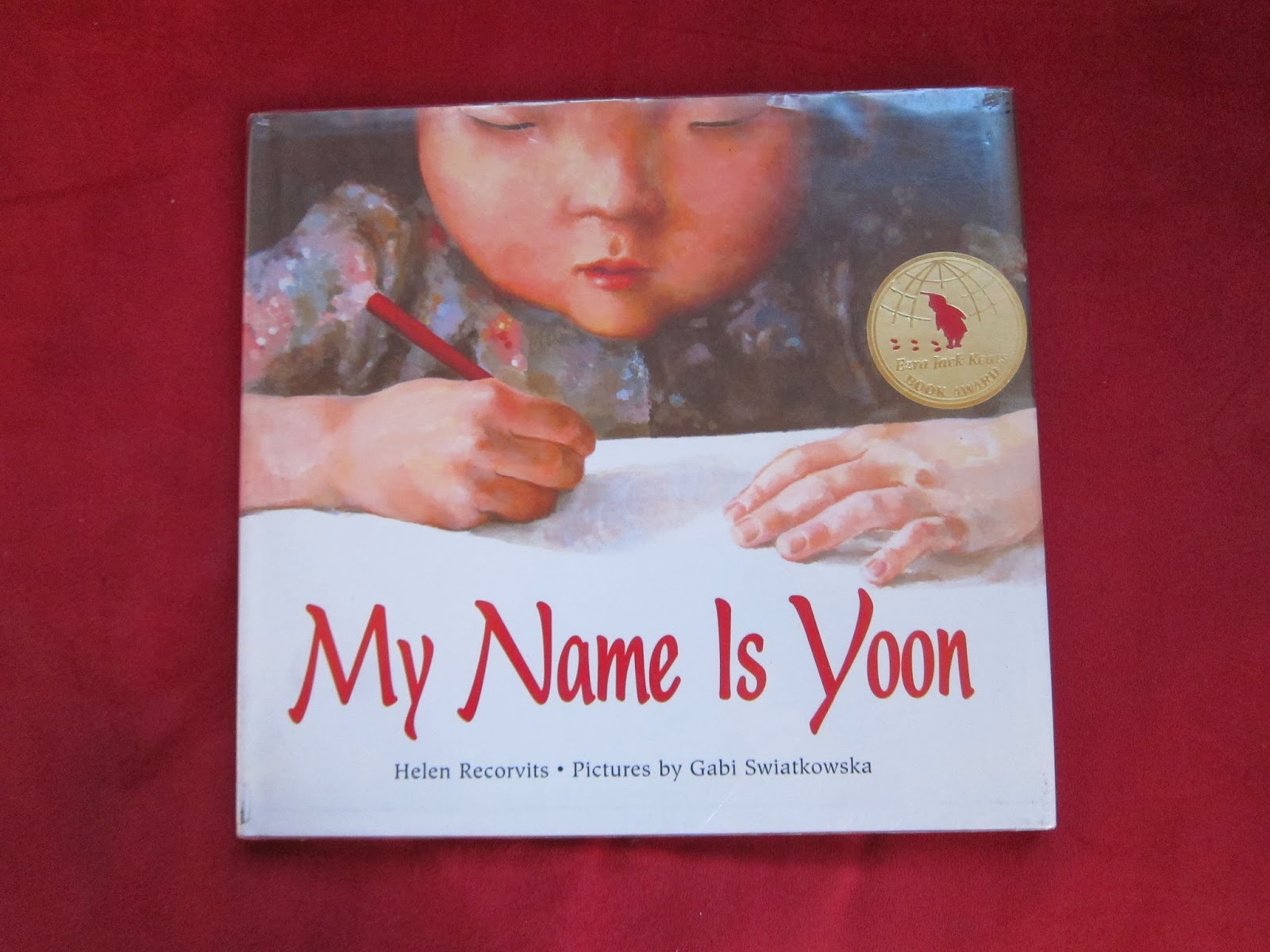 My Name is Yoon by Helen Recorvits.  Another touching immigrant story about the power of names and family history.

What are you reading?

Birthday Books and Inscriptions for a Six-Year-Old 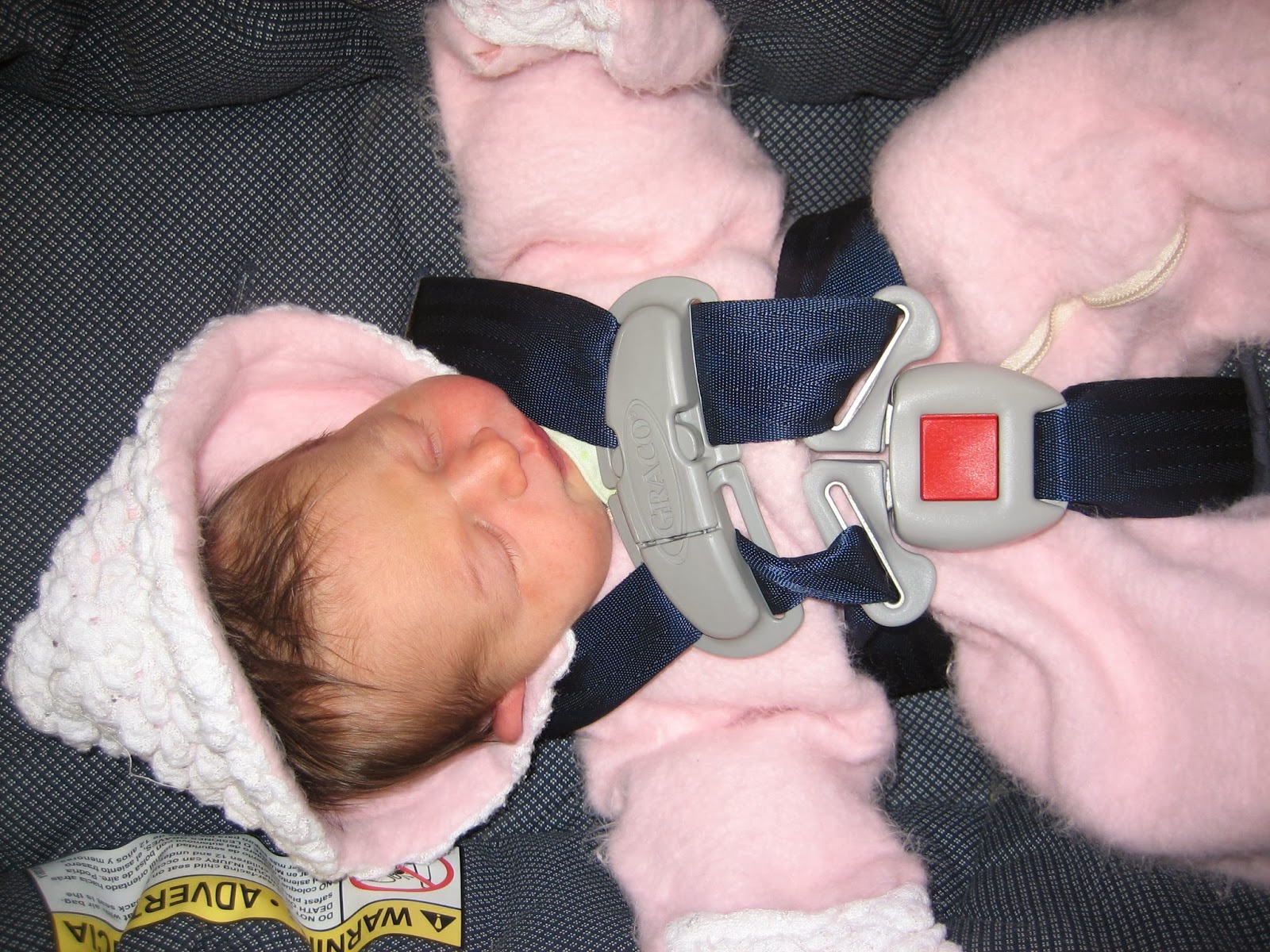 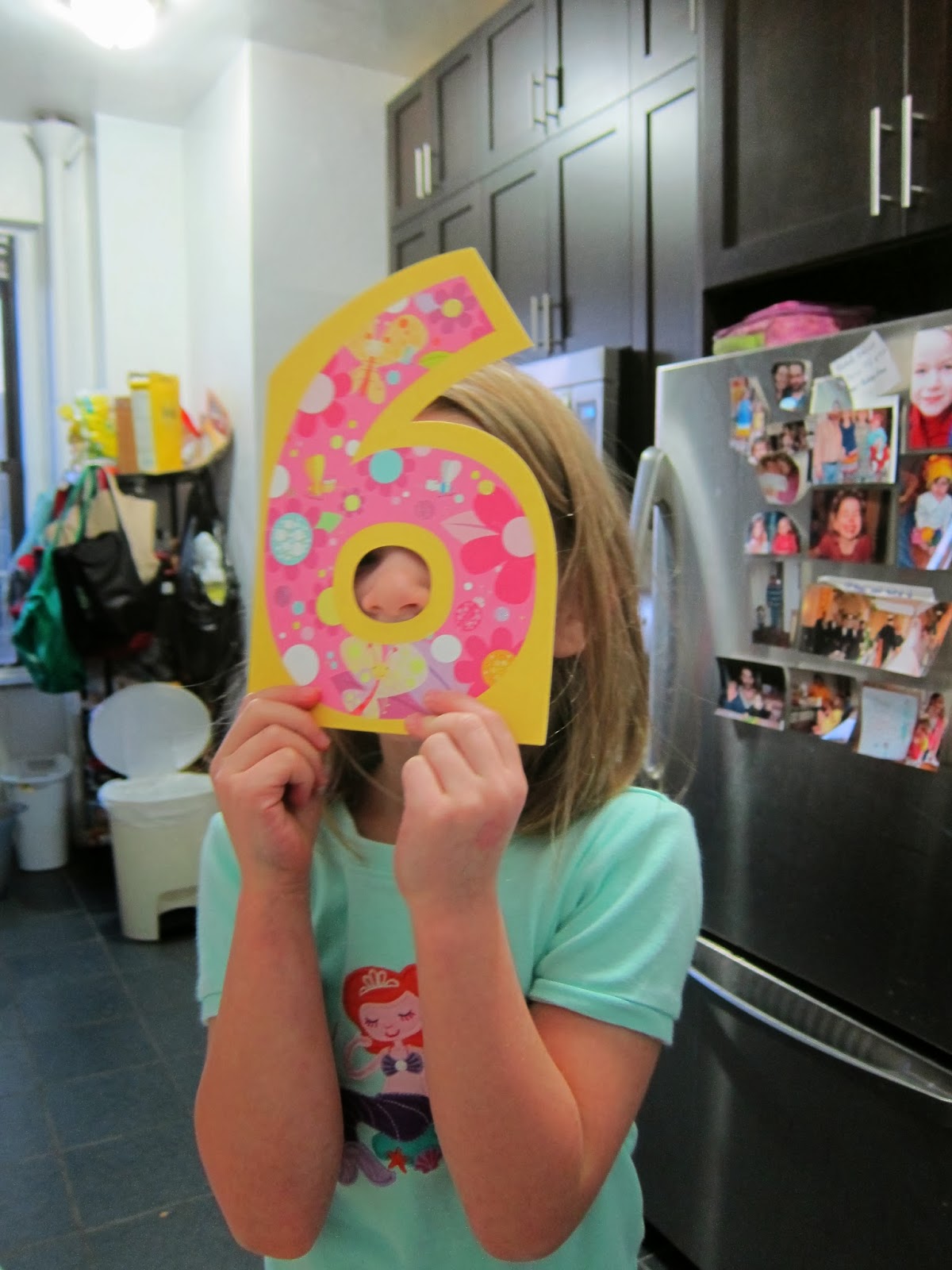 Six years ago today, it was close to 60 degrees.  I know this because it was the day I brought home my younger daughter from the hospital.  Despite the weather, I insisted on dressing her in the same pink, fleecy bunting, I'd come home from the hospital in nearly 33 years before.


Regular readers know that I always write inscriptions on the books I give my daughters for their birthdays.  Today my younger daughter turned 6.  I only gave her two books, with two more to follow which align thematically with a gift that my parents will give her this weekend.  I chose these two because they inspired repeated requests for reading, but I realized they dovetailed nicely with each other as they are both about sibling relationships.  So without further ado, here are the two books I gave her and what I wrote in them.

The Seven Chinese Sisters.  May you and your sister always find your own strengths and use them to help each other. 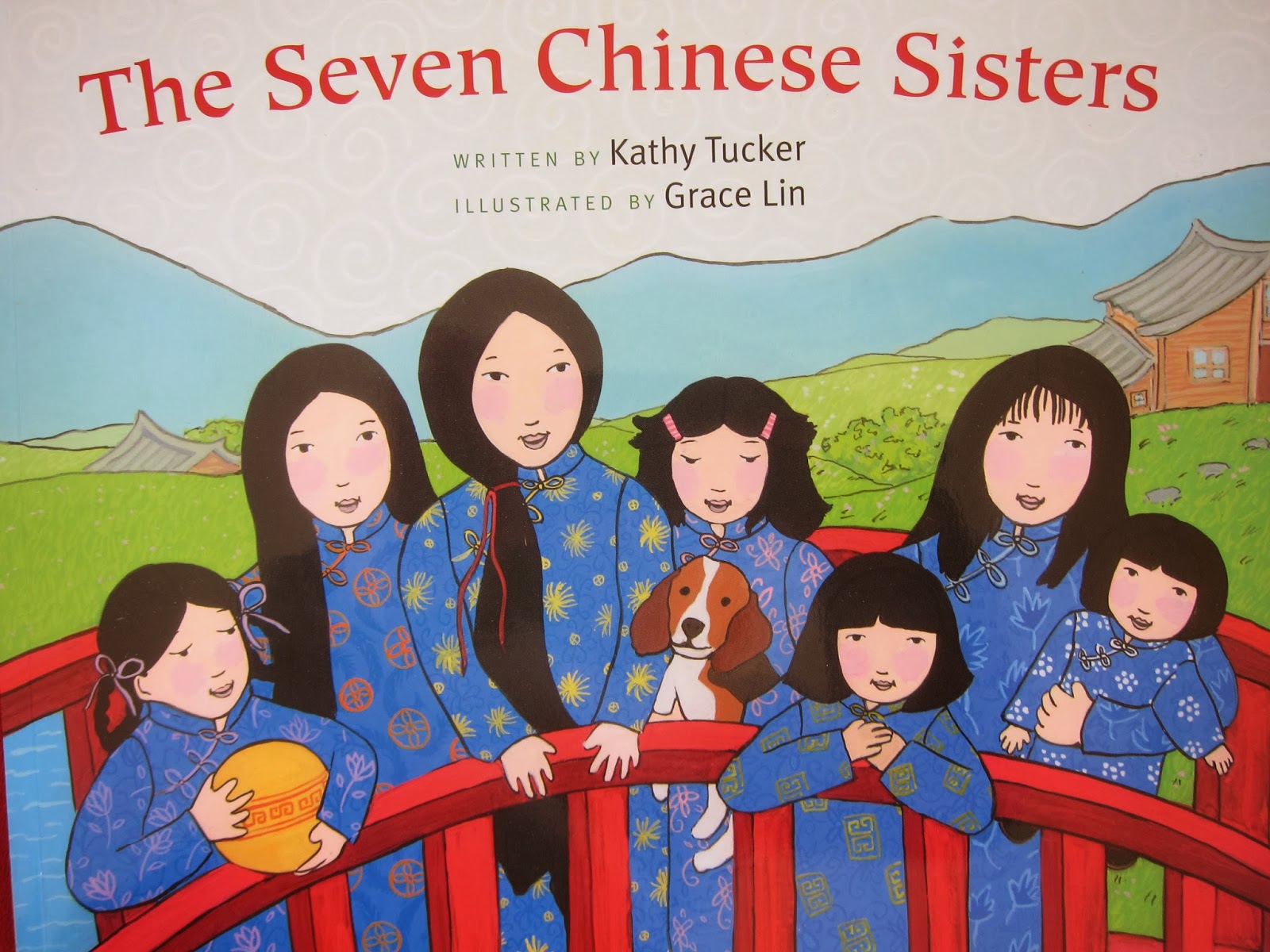 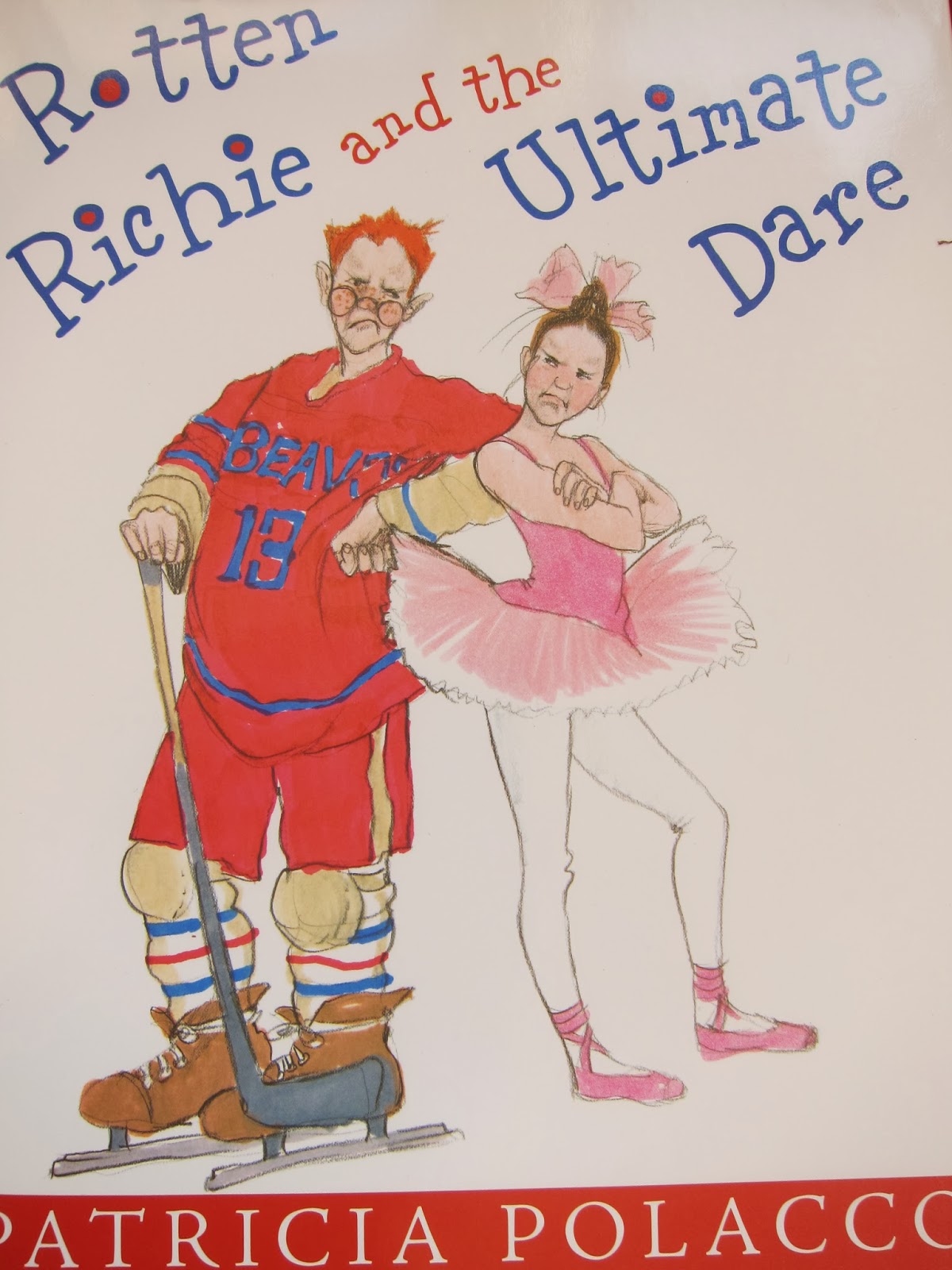 Rotten Richie and the Ultimate Dare.  As you and your sibling grow up, fight, and compete with each other, may you always respect each other's passions and accomplishments and remember that, in spite of it all, you love each other.  After all, just see whom the author dedicated this book to! [It's her brother, of course, the "rotten Richie" of the title.]

What books have you given as gifts?  Do you inscribe them?
Posted by Even in Australia at 2:41 PM No comments: