The Oscars of Children's Books

In honor of the ALA Youth Media Awards, which are being announced this morning, I came to school in a sparkly silver dress.  It has long sleeves and is a bit sack-shaped and is from the Gap, but hey, if Sharon Stone can wear a black turtleneck from the Gap to the Oscars, then this dress is certainly festive enough.

The ALA Youth Media Awards are the Oscars of children's literature.  In fact, just like the Oscars, they save the "big" awards until the end.  Since the ALA Mid-winter convention at which the awards are announced is being held in Denver this year, we don't know the winners yet, as they begin the announcements at 8am Mountain Time.  Therefore, the Caldecott and Newbery Medal and Honor winners won't be announced for another hour or two.

As the Children's Book Oscars, I think ALA needs to step things up a bit.  I want a red carpet, with librarians, authors, and illustrators asked who they are wearing.  I want to hear about the jewels loaned by Harry Winston.  And I want them televised.  To that end, I have a few suggestions.

2.  Nominate a short-list of 10-12 books for each award.  Without nominees, you can't invite authors and illustrators to the award ceremony because the field is wide open.  The Oscars went from 5 nominees for best picture to a maximum of 10.  There must be some procedure for the ALA membership to vote and make this change.

Until then, I'll be sitting in my sparkly silver dress, watching the live feed in between classes coming to the library.

Next year, the red carpet!
Posted by Even in Australia at 10:17 AM 1 comment:

On the eve, literally, of the announcement of the winners of the Caldecott and Newbery medals tomorrow morning, along with a slew of other awards, I tallied our school's votes just in time. 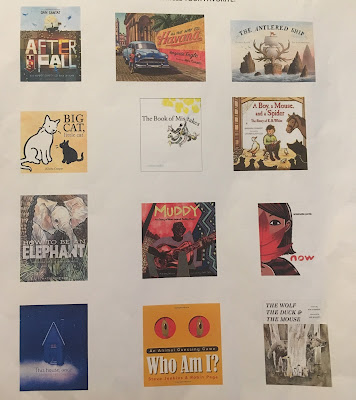 Kindergartners and first-graders voted only for their favorite; everyone else voted for their top three.  A book got 3 points for a first-place vote, 2 for a second-place vote, and 3 for a third-place vote.

It was followed closely by After the Fall (How Humpty Dumpty Got Back Up Again), then Big Cat, Little Cat, and then The Book of Mistakes.

I can't wait to find out whether any of our choices were selected by the ALA.

May the best book win!
Posted by Even in Australia at 2:02 PM No comments: