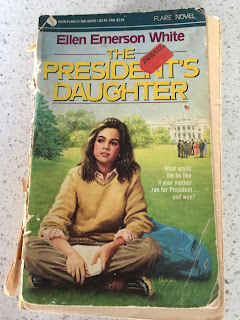 This election has brought back memories of a book I loved with uncommon devotion when I was about 10 or 11 years old: The President's Daughter by Ellen Emerson White.  As the title suggests, the focus was not on the first female president but on her daughter, the oldest of her three children.  You can see how well-loved this book was i nthe photo below.  The spine has disintegrated and although you cannot see it, the back cover has fallen off completely. 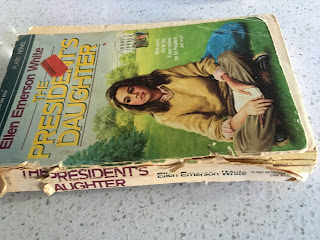 I'm not sure exactly why I loved it so much.  It was good, sure, but perhaps an odd choice for constant rereading.  In 2016, the one part that I remember clearly is Meg, the daughter, asking her mother if she can vote for someone other than her mom.  Her mom, amused, replies that of course she can.  It makes me wonder if someone's children are perhaps not voting for him (or her) this year. Thank goodness for the secret ballot!

The book was published in 1984 and I apparently purchased it for less than $3.00.  The author then "updated" it in 2008.  Those of you familiar with my purist sensibilities will know that I disapprove.

Did anyone else read the original version?
Posted by Even in Australia at 4:51 PM 1 comment:

The Princess and the Shark

The Princess and the Shark.  If I ever write a children's book, that's what it will be titled.  If, that is, I don't care about quality but do care about selling a lot of books.  Based on the very small, unreliable sample size of 2 school libraries that I've worked in, both on the Upper West Side of Manhattan, girls in grades K-2 want books about princesses and their male peers want to read about sharks.

There are other scary, fierce, awesome-looking animals besides sharks.  Why the obsession?  I have no idea.

And the princesses.  When these girls ask for princess books they mean Disney.  I offer them Shirley Climo's The Egyptian Cinderella and they turn up their noses.

Of course there are other requested topics.  Ballet, gymnastics, soccer, and lately, cooking.  The boys also ask for books about the military - soldiers, military aircraft, the navy.  Crafts, especially origami, are big too.

The gender divide is (nearly?) absolute.  To date, I have never had a boy request a princess book or a girl request a book about the military.  I probably have had boys ask for cooking and have definitely had them ask for origami, and I've probably had girls ask for sharks.

So in order to capture the market and straddle that divide, The Princess and the Shark it is!
Posted by Even in Australia at 4:48 PM No comments:

In the past two days, two parents have come to me saying, "My child has read all of Harry Potter (and/or Percy Jackson) (multiple times)... what's next?"  While I have a lot of great suggestions for the child who's read everything, many of those may not appeal to a child who is just looking for fantasy.  I'm not personally a fantasy reader, so I haven't read all of these myself, but these recommendations come on good authority.  For those kids, here are a few ideas.

The Hobbit by J.R.R. Tolkien.

Chronicles of Narnia by C.S. Lewis

A Wrinkle in Time quintet by Madeleine L'Engle.

Not exactly fantasy but may appeal to fantasy lovers:

For fans of fairy tales, these series take them to a new, darker, level:

The Land of Stories series by Chris Colfer.

The SIsters Grimm by Michael Buckley and Peter Ferguson.

The Grimm series  by Adam Gidwitz.

What other books do you suggest for a child who loved Harry Potter and/or Percy Jackson and is ready for something new?

Posted by Even in Australia at 9:44 AM 7 comments: