Nate the Great Really Is Great

Most early readers are boring.  They have to be.  They have to contain short words and repeat them.  A lot. But the Nate the Great series, while not for the very earliest of early readers (like the Biscuit books) are the first early readers that I have enjoyed with my daughter.  Now, while I know I said she doesn't really like early readers and prefers to attempt chapter books, we have made an exception for this series.  She can't quite read them by herself but we can alternate pages or paragraphs with just a little help. 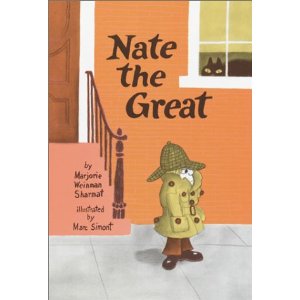 Nate the Great is a detective.  While eating as many pancakes as possible, he investigates mysteries of great importance reminiscent of those Encyclopedia Brown used to solve (although I remember those being both on a higher reading level and slightly more scientific), such as finding missing grocery lists.  Nate's serious tone ("I do not eat on the job.") functions as pseudo-serious for us adults reading along.

In addition to being the first early readers I can tolerate (and actually like!), they are also the first mysteries that have not scared my daughter.  When a Cam Jansen mystery involving a robbery scared her, I figured I'd solve the problem by flipping to the end of the book and assuring her that the perpetrator had been caught.  No dice.  An hour later, she came out of bed, worried that the wrong person had been caught and would go to jail.  Nate is perfect for her.

What are your favorite beginning readers or early chapter books?
Posted by Even in Australia at 8:32 PM