If You Don't Have It, Read About It! Snow Edition

Here in NYC, we're suffering (yes, suffering!) from weirdly mild weather and a scarcity of snow.  So, in its absence, we've been reading about snow.  A poor substitute for the real thing, but these two beautiful books go a little way in alleviating my snow cravings. 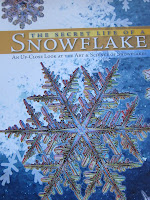 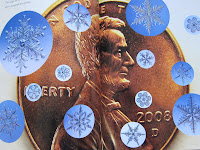 The Secret Life of a Snowflake: An Up-Close Look at the Art & Science of Snowflakes by Kenneth Libbrecht is my older daughter's favorite of the two.  I think she was taken in by the unbelievable gorgeous photographs, as was I - this is one of the few books I have bought without checking it out from the library first!  Dr. Libbrecht, a physics professor, photographs snowflakes with colored lights behind them, which lends them a breathtaking prismatic, rainbow effect.  With several books for adults on the same topic, Dr. Libbrecht, a professor of physics at CalTech, mostly succeeds in explaining and describing snowflakes to a younger audience.  I especially like the page where he shows the relative sizes of snowflakes compared to a penny.  And I never knew that snowflakes come in column (pencil) shapes, or that they are often not quite symmetrical. 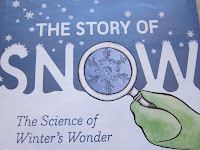 The Story of Snow: The Science of Winter's Wonder by Mark Cassino with Jon Nelson, PhD. is my pick.  It also has beautiful, if slightly less dramatic, photos, as well as other diagrams, and the scientific explanations are a little more comprehensible to the layman (or, more importantly for our purposes, the laychild).  It focuses on the same set of facts as the Libbrecht books: how snowflakes form, the different types of snowflakes, including the column-shaped ones, and the fact that snow crystals are rarely perfect (or symmetrical), among other things.

Since both books cover essentially the same ground, I would advise owning only one.  Take them both out of the library and see which one you prefer.

What is your favorite nonfiction book about snow?
Posted by Even in Australia at 10:04 AM