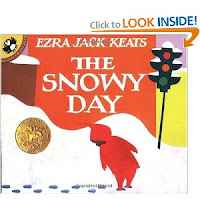 As far as I know, there are no books about the precipitation currently falling in New York, with good reason.  It is not picturesque, like snow.  You cannot play in it.  You can barely walk in it.  There may not even be a word for it.  Freezing rain does not adequately describe the icy, slushy mess on the ground this morning.  But there are plenty of books about snow.  Our line-up:
My kids and I can agree on the pleasures of The Snowy Day by Ezra Jack Keats.  It's a classic (and a Caldecott winner) for a reason.  Enough said. 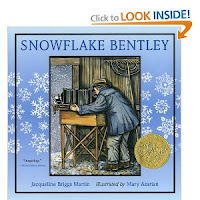 Another wonderful Caldecott winner is
Snowflake Bentley by Jackie Briggs Martin.  This biography of Wilson Bentley, who made the study and photography of snow his life's work, is fascinating, with beautiful woodcut illustrations and informative sidebars set against a background of blue with snowflakes falling.  My five-year-old was entranced; my three-year-old was a bit bored.  My only complaint - Bentley's experiments in photographing snowflakes are described but not explained.  The information that letting only a little bit of light reach the negative and leaving the shutter open for 90 seconds was his successful method doesn't mean a whole lot to non-photographer me - or my five-year-old.  I'm definitely going to look into books by the same author and the work of illustrator Mary Azarian.  This book also prompted me to add Snow Crystals, which contains reproductions of some of Bentley's photos, to my Amazon wish list via the handy but somewhat creepy Amazon features which show you other books you might be interested in based on what you have already browsed. 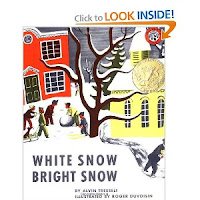 White Snow Bright Snow by Alvin Tresselt and illustrated by Roger Duvoisin is another Caldecott winner, albeit of older vintage (it was published in 1947).  It alternates a lovely poem about snow with the simple story of how various townspeople cope with and enjoy the storm.  The illustrations have that bright red-yellow-white-black color palette that just say "vintage" to me.  (There was a production reason for the limited color palette, right?)  I love the descriptions: the church steeple wears a "pointed cap" of snow; the fence posts wear "dunce caps" of it and the windows of houses peek out "from under great white eyebrows."  Again, my five-year-old appreciated it; my three-year-old liked the story part but didn't have much patience for the poem.  I'm going to seek out more work by this pair, too. 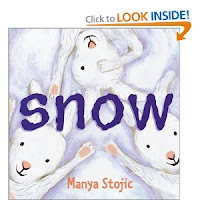 Another favorite of mine is the simply titled Snow by Manya Stojic.  This delightful book shows how different members of the animal kingdom sense and respond to snow.  As the geese prepare to fly south and the bear gets ready to sleep the winter away, Snow introduces the concepts of migration and hibernation, without using those explicit words.  After the snow falls it is a "sparkling blanket" covering the forest.  With its large print text and close-up illustrations, this book is ideal for younger children. 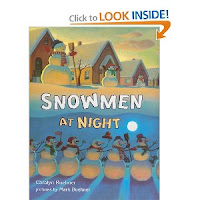 My children's vote for favorite snow book, however, goes to Caralyn and Mark Buehner's Snowmen at Night.  A cute rhyming book, it follows the exploits of snowmen after their creators go to bed. 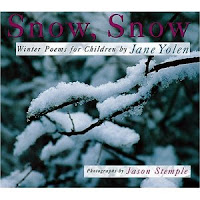 Finally, after seeing it reviewed on another blog (unfortunately I don't remember which one), I've put a library hold on a book of poems about snow by Jane Yolen Snow, Snow: Winter Poems for Children and am eagerly awaiting its arrival.
What snow gems am I missing?  And is there another topic that has produced as many Caldecott winners?
Posted by Even in Australia at 9:58 AM

Email ThisBlogThis!Share to TwitterShare to FacebookShare to Pinterest
Labels: Snow