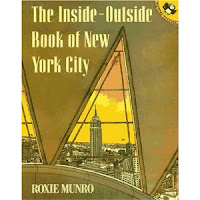 When I spotted The Inside-Outside Book of New York City by Roxie Munro on display at my daughter's school library, I knew I had to have it.  What I didn't know was that it was part of a series of such books, 4 of which feature cities and one of which, reviewed by me here, which looks at libraries inside and out. Munro has also written and illustrated The Inside-Outside Book of Texas and Inside-Outside Dinosaurs, neither of which I have had a chance to read.
The concept behind the series is, quite simply, terrific.  In each book, Munro depicts buildings in the chosen city from both the outside and the inside.  But which buildings she chooses to depict makes the quality of the books vary.  Here's a look at the four books about cities, one by one.
The Inside-Outside Book of New York City vies with The Inside-Outside Book of Libraries for my favorite in the series.  The choices of locations are pitch-perfect: not just the famous landmarks (although even those are inspired - how often do you really get to go in the Chrysler Building and look out one of those triangular windows?), but a subway station (outside) and a subway tunnel as seen from inside the front or back car of the train, Madison Square Garden (outside) and the circus playing inside, Lincoln Center and the Nutcracker being performed within.  And, as in the The Inside-Outside Book of Libraries, Munro also shows the more mundane, yet perhaps more important: an ordinary walk-up apartment building's lobby, and the view out the window of one of its apartments.  The illustrated spreads themselves have absolutely no text other than identifying the buildings themselves (the insides, such as the circus or the Nutcracker are not labelled) but at the end of the book is a list of the sites and some information about each one. 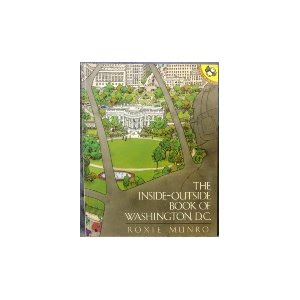 The Inside-Outside Book of Washington, D.C. also has some fascinating places: the Supreme Court, the Bureau of Engraving and Printing (where money (bills) are printed), the floor of the Senate, the printing presses of the Washington Post juxtaposed with someone delivering the papers and a press conference inside the White House, a reporter outside of it and the TV newsroom where the footage is being produced.  The only site which left me scratching my head was the building housing the Organization of American States, wherein dancers in native costume performed.  Like the New York book, information about each location is included at the end. 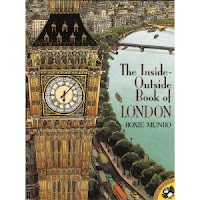 I thought I'd enjoy the books about London and Paris, cities which I've never been to, more than the ones about New York, which I'm obviously very familiar with, or Washington D.C., which I've visited numerous times.  But the reverse was true.  Seeing familiar places provided a jolt of recognition that added to, rather than detracted from, the pleasure of these books.  And having never been to London or Paris, I was less able to judge Munro's choices of buildings in the books about them.

Nonetheless, in The Inside-Outside Book of London I enjoyed seeing the inside of an umbrella shop, the cast taking a bow at a show in the West End and, perhaps best of all, seeing the outside, and then the view from inside the prison that is the Tower of London.  The hairstyles of visitors to the Victoria and Albert Museum place this book squarely in the 1980s, but I don't think most of it is outdated.  Like the others, the text is at the end of the book.
Unlike the others, The Inside-Outside Book of Paris has text alongside each double-page spread.  I'm not sure which style I prefer - they each have advantages.  The selections here vary from well-known museums and institutions such as the Pompidou Center to a puppet theatre, a local bakery, and an open-air market.

What is your favorite book about a city?
Posted by Even in Australia at 2:13 PM