When we walk around our neighborhood, we see something you don't normally think of when you think of New York:  gargoyles.
﻿ 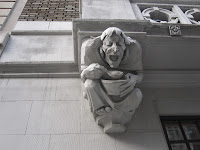 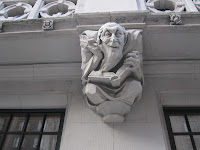 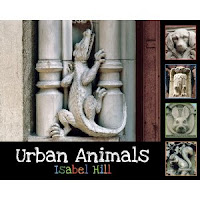 And when Isabel Hill walks around New York, she sees animals.  Not real ones, but sculpted ones, hidden (to greater or lesser degrees) on buildings all over the city.  In Urban Animals, she takes us on a tour of her finds.  While the rhyming text is labored ("In this keystone with its tail in a curl/sits a busy city squirrel."), and the highlighting of architectural terms (defined in a glossary at the back of the book) is distracting, the photos themselves are compelling.  She includes a list cleverly titled "Animal Habitats" which gives the location of each animal depicted so the reader can follow in her footsteps (although the animals are located too far apart to see them all on the same trip).  And if you can't do that, or even if you can, you'll still be inspired to look a bit more closely at the buildings you pass each day.  Despite its flaws, this book will appeal to animal lovers, New York-ophiles and budding architecture buffs alike. 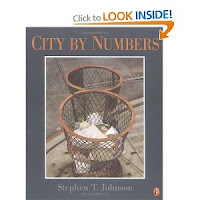 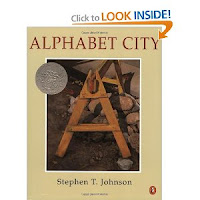 Stephen Johnson's Alphabet City and City by Numbers also prompt the reader to look at his or her environment from a new perspective.  In his paintings, the elements of city life suddenly reveal the shapes of letters and numbers, respectively.  My five-year-old, who until now had found these books boring, is suddenly fascinated by them.  I do wish Johnson had, like Hill, included a directory of where he found each of the images he chose.  While some are obvious (M is made with the arches of the Brooklyn Bridge, I'm pretty sure C is from the The Cathedral of St. John the Divine , just down the block from those gargoyles), others are impossible to place  (two floors of fire escape stairs form B, the three elements of a traffic light, when viewed in profile become E).  And are any of them actually in the New York City neighborhood known as Alphabet City?
﻿
﻿
Posted by Even in Australia at 8:15 PM