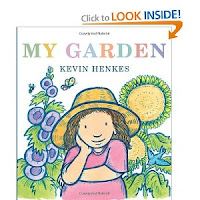 The idea of a child's paradise as candy-filled is not a new one.  In The Nutcracker, Clara/Marie is whisked away to the Land of Sweets.  And in My Garden by Kevin Henkes, a little girl declares that in her (fantasy) garden, the rabbits will be chocolate rabbits - so she can eat them!  Not satisfied yet, she goes on to plant a jellybean bush.  The illustrations in My Garden are beautiful with a lovely pink-and-green-and-yellow color palette.  The last page shows a seashell (sadly, not edible) the girl planted, with roots beginning to sink into the earth.
Two parents in my daughter's kindergarten class used this as a jumping off point for a project with the students.  After reading the book, the class planted flowers and could choose other items, such as magic wands and lollipops, to "plant," too.  A nice way to bring the book to life.
My younger daughter just learned a song with a similar theme in preschool: "Oh, if all the raindrops were lemondrops and gumdrops, oh what a rain it would be-ee!  Standing outside with our mouth open wide!  Aah-a-ah-a-ah-a-ah! Oh, if all the raindrops were lemon drops and gumdrops, oh what a rain it would be-ee!"

This song and book triggered a memory for me.  At my kindergarten graduation we sang a song called The Lollipop Tree, and I got to hold said tree!  As in My Garden and the raindrop song, the song not only uses the theme of a candyland paradise, but plays with the inversion of the natural order.  If only we could plant something man-made, such as lollipops (or money!) and have them grow into trees!
Posted by Even in Australia at 9:37 PM