Today is my daughter's 100th day of kindergarten.  When your child's 100th day of school falls may be different, depending on the starting date of school, whether you get certain holidays off, and, especially this year, how many snow days you've had!  As seems to be the pedagogical fashion these days, her class is celebrating.  Each child was asked to bring in 100 of something (she brought buttons, below) and the teacher is going to create a "100 Museum."  They are also going to do math activities around the 100 theme (such as sorting, counting by tens, etc.) throughout the day. 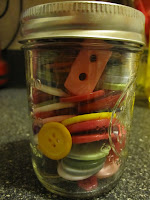 Although I hate my daughter's reading log with a passion, and know other people feel the same way about the 100th day assignments, I actually liked this project.  My daughter could mostly do it on her own and it was fun and educational at the same time. 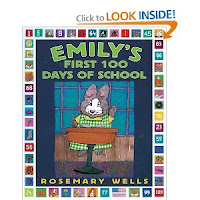 In anticipation of the 100th day, I looked around for some related books and there are plenty!  My daughter brought in Rosemary Wells's Emily's First 100 Days of School to share with her class, she loved it so.  I, on the other hand, found it a bit boring (although I love certain other Rosemary Wells books).  For each number up to 100, Emily tells something she did or saw or made - for example the number of the bus she takes to school, or how many vegetables her father put in his soup.  It subtly introduces some math concepts as well. 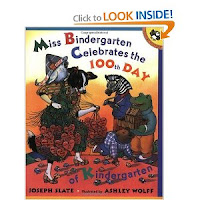 Miss Bindergarten Celebrates the 100th Day of Kindergarten by Joseph Slate is the second in the series which starts with Miss Bindergarten Gets Ready for Kindergarten.  It follows the format of the first (which, by the way, shows Miss Bindergarten shelving classic books including The Lion and the Little Red Bird by Elisa Kleven (one of my favorite picture books ever) and Robert McCloskey's Make Way for Ducklings and Blueberries for Sal), as we watch each animal-child in the class, in alphabetical order (Adam the alligator, Brenda the beaver, and so on) prepare for the 100th day.  The depictions of the children's preparations are interspersed with spreads showing the eponymous canine teacher doing the same.  It was fun for my daughter to see what things Miss Bindergarten's students brought in and compare them with what her classmates brought.  This book also has a note at the end, crediting a woman named Lynn Taylor with pioneering 100th Day celebrations in 1981 or 1982 (I just missed out!).  The note states that she was influenced by Mary Baratta-Lorton, who did work on teaching children math and number concepts.  A quick google search turned up the same information repeatedly, but nothing additional and no independent sources that I thought were reliable. 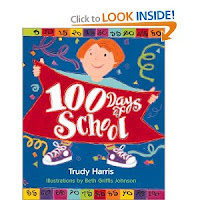 Trudy Harris's 100 Days of School is more explicitly math-oriented.  It shows all different ways to get to 100 - by adding 95 and 5, by multiplying 10 (children) times 10 (toes), and so on.  The book 's playful rhyming scheme makes it an enjoyable introduction to these concepts.
What is your favorite 100th day of school book?  Do you know anything else about the origins of the 100th Day celebration?
Posted by Even in Australia at 7:50 AM

Email ThisBlogThis!Share to TwitterShare to FacebookShare to Pinterest
Labels: 100th Day of School