Library.  A place in which literary, musical artistic, or reference materials (as books, manuscripts, recordings or films) are kept for use but not for sale. (Webster's Ninth Collegiate Dictionary)
Those of us who love libraries know that they are much more than the sterile definition above.  Roxie Munro and Julie Cummins, the author and illustrator of The Inside-Outside Book of Libraries, know it too.  This marvelous book (one in a series of Inside-Outside books which focus mainly on cities) takes the reader, as the title suggests, on a tour of libraries, showing the buildings they are housed in both from inside and out. 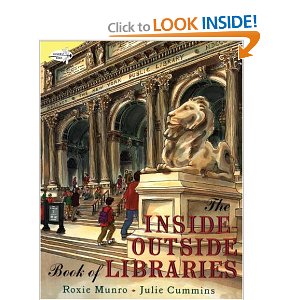 The libraries depicted range from a branch of the NYPL located in Chinatown, which won my heart immediately as it is one of the branches I frequented as a child, to one on an aircraft carrier, to one in a prison, to one for the blind and physically handicapped, to a bookmobile.

This book also takes us to libraries which don't focus on books at all, such as a tool library and the library at the Explorers Club, a repository of maps and other artifacts.  That one made me wonder what the difference is between a library and a museum, anyway.  (Museum. An institution devoted to the procurement, care, study, and display of objects of lasting interest or value.)   The only type of library missing which I would have liked to have seen included is a toy library, which I first learned about from a friend who lives in Asia; I think they are more common outside the United States.  (Although the Inside-Outside series ventures beyond our shores in the works on cities, this volume stays here.)
One of the many things I love about this book is that it shows how libraries are particular to the communities they serve.  The Chatham Square branch of the NYPL in Chinatown has books and all sorts of other materials in Chinese while the library for the blind has books in Braille.  Through these well-chosen examples, the reader sees that a library is much more than a collection of books or other items: it is a community center, an educational facility, a link to the outside world.  In a stroke of near-genius, the last spread shows "home libraries."  These are not fancy wood-panelled rooms but rather any place in any type of home that holds the books that are precious to its inhabitants.  What a wonderful note to end on!
This book is rather wordy so I violated my own rules and paraphrased and omitted as I read it to my girls.  They were fascinated.  My three-year-old was particularly intrigued by the prison library (go figure).  When I asked my five-year-old the admittedly inane question, "Isn't this a nice book?," she quickly corrected me.  "No, it's an interesting book."  She was right.  Go pick it up at your local library today!  (I couldn't resist.)

Posted by Even in Australia at 7:34 AM